Gold advocates may not appreciate their favorite precious metal being compared to cryptocurrency, yet the two have more in common than one would assume.

Ancient Greek philosopher Aristotle proposed the following four characteristics that an effective currency should have: it should be durable, portable, divisible, and have an intrinsic value independent of any other factor.

Even those who remain skeptical of cryptocurrency would have to admit that both crypto and gold outperform traditional fiat money in achieving Aristotle’s four principles. So just how much do they have in common?

The comparisons don’t end there. Just like all natural resources, the majority of them often end up in the hands of a select few and, for the most part, cryptocurrency is no different. The gold market may be more transparent than the diamond market, but ultimately the centralization of resources is one that gold and cryptocurrency share to different extents.

Alright, hyperbole aside, gold does have some features that cryptocurrency doesn’t have.

The U.S departed from the gold standard in 1971, but for a long time before that paper money was used as a symbol for gold stores that remained elsewhere. Many still call for a return to the times when the paper dollar was backed by gold, and while that would most certainly make the dollar more secure, it doesn’t solve the problem of finding a currency for the internet age. After all, gold coins are hard to transact online, and can’t be easily divided.

The shape of things

The shape of the chart below should seem familiar to cryptocurrency enthusiasts. At first glance, you may think you’re looking at the January-December spike in the cryptocurrency market. Yet the chart actually displays the gold market’s journey over the last twenty years. 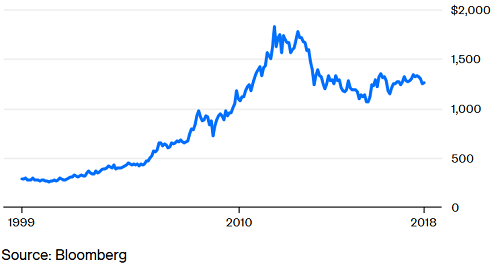 If we compare that to the Bitcoin charts over the past year alone, we see some similar shapes, almost as though cryptocurrency was going through an accelerated version of gold’s path over the years. 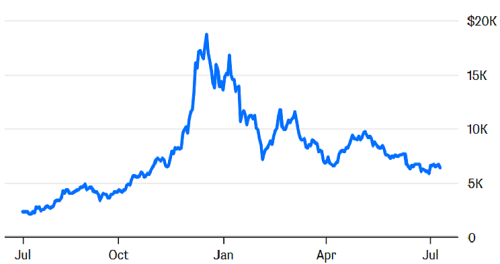 The similarities between those lines are obviously largely superficial, and both operate on different scales, yet they might also reveal something about the market psychology of the average buyer.

In each of the charts, the rate of growth experiences a sudden spike as popularity accelerates. Likewise, the three-pronged peaks at the top of each chart suggest a distinct similarity between how traders view gold and cryptocurrency.

Ultimately, both gold and cryptocurrency will each be suited to different environmental and technological conditions, but are they really all that different at their cores?