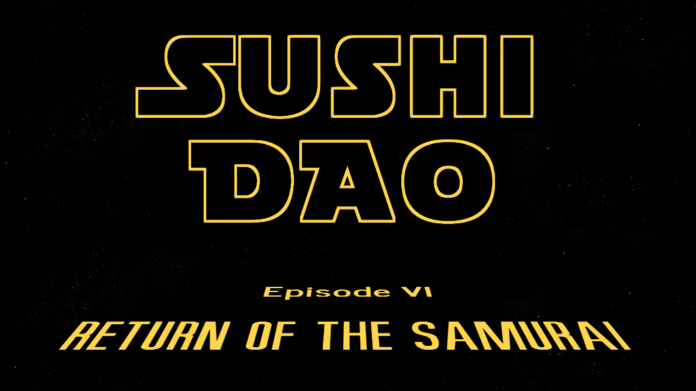 Sushi’s popular community support team known as the Samurai will be brought back following a governance proposal.

Our community has always been the backbone of Sushi ❤️ and we keep looking for new ways to disrupt the status quo. That's why we want to reinstate our community's secret weapon – the Samurai 🥷, as your first line of defense in any social channel or governance forum. pic.twitter.com/ooKKK6YgJL

Can the Samurai restore balance?

The Samurai were an important part of Sushi DAO’s operating team and first responders for community needs. The team, which consisted of seven DAO members, disbanded in January after the SMSP-0 governance proposal passed, which called for a complete restructuring of the DAO.

Allegedly, the suspension of the Samurai’s activities were a direct result of the power struggles within Sushi’s upper management. Some of them were outspoken critics of senior developer Omakase and Sushi’s then-CTO Joseph Delong.

At the current time, it is still unclear who will resolve Sushi DAO’s leadership crisis. Under SMSP-0, Daniele Sesta would have become the most influential person within the Sushi community. However, after Wonderland’s spectacular failure, it seems unlikely that the proposal will be implemented.

A new proposal to reinstate the Samurai role is on its way to pass today. So far, the proposal has fully reached the quorum of 5 million SUSHI, with votes being almost unanimously in favor.

The proposal has nominated the first five Samurai, who all previously served under the Samurai v1 program and who can expand the team on their own if needed. According to the proposal, the Samurai v2 program will bear a one-time cost of 480,000 USD, in addition to 20,000 SUSHI (~60,000 USD) annually.

Tangle, who has taken control of the Sushi DAO Discord server after Joseph Delong stepped down called this a reasonable compensation, stressing that the Samurai are an integral part of the Sushi DAO family:

This proposal is extremely ambitious, but seeing what they have all done officially in the past 6 months, and even more before that, I know they are capable. Each one of these Samurai has helped me personally in several ways, and even more so for the community. They are always there and available, and have saved many people’s funds, or have been a wealth of knowledge for others.

As a stakeholder only, I can say with certainty that the Samurai have had a huge impact on my user experience and community engagement. They do an incredible job at handholding users, answering questions, solving problems, and engaging with the community. They are an asset to the community and the business side of Sushi.