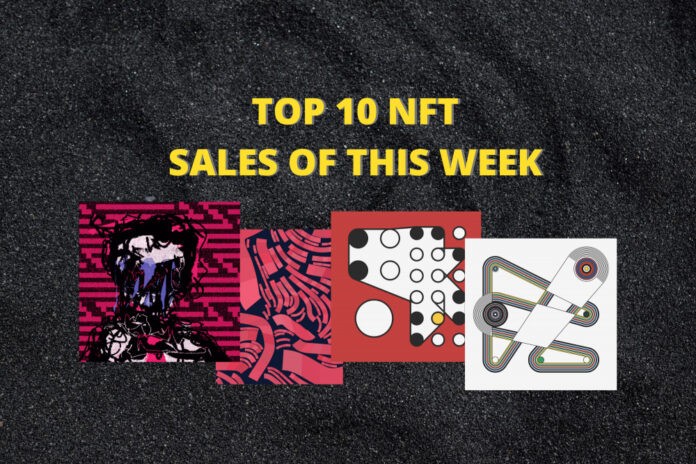 Another eventful week comes to a close; the NFT market rages on.

Axie Infinity, the gaming project that has convinced many to leave their jobs, tops the charts with $86.1 M in trading volume. Art Blocks continues to draw massive traction, with 139.05% growth in trading volume and some of the top sales. It is also interesting to note that the market focus is slightly tilting from projects and platforms to artists. In fact, the top sale of this week was recorded by a single-piece NFT.

So, without further ado, let’s take a quick look at the top NFT sales that shook the market in the last 7 days.

A few days back, Snoop Dogg announced that he was the big whale behind the pseudonymous Twitter profile CozomoMedici. To mark the revelation, he has made another stupendous purchase as Cozomo de Medici on Super Rare — A single piece titled ‘Some Asshole’ from XCOPY.

This XCOPY NFT was sold for just 25 ETH a year ago. In March, its value jumped to 100ETH, keeping in line with the industry growth and the artist’s rise to prominence. With one more coveted piece of NFT, Cozomo de Medici’s total collection is worth around $17.76 M now.

Another GIF from XCOPY that has got everyone thinking. Not so much with artistry as the baffling price. If you have been a keen follower of the NFT market, you may be familiar with the name ‘XCOPY’ — A London-based artist who explores death, dystopia, and apathy through distorted visual loops. The flashing imagery comes with a warning as it can hurt your eyes if you attempt to demystify them, staring for long. Today, XCOPY is a leader in the NFT-art community with a total of 1,913 artworks sold, a lot of which are considered blue-chip. They are valued at 10,673.515 ETH.

Fidenza is a generative art project from Tyler Hobbs. The Texas-based visual artist focuses on algorithms, plotters, and paint. Tyler claims that Fidenza is his most versatile generative algorithm to date. It may not be very complex, but has produced some interesting results owing to the flexible nature of the core structure. It strikes a balance of unpredictability and quality, which is quite challenging as far as generative art is concerned. Fidenza is being showcased on Art Blocks, the trending platform dedicated to creative coding and generative art on the Ethereum Blockchain.

Chromie Squiggle is a vibrant yet simple generative art on Art Blocks. The NFTs reflect the spirit of the platform in its unique style. Not surprising given that it was launched by SnowFro, who is also the founder of Art Blocks. Chromie Squiggles have been trending for some time now. Last week, three Squiggles made it to the top 10 list, two of which claimed the first and second positions. Although there are 10,000 of them in total, only 9207 Squiggles have been minted. The public minting is permanently stopped. Squiggles are now only available on secondary NFT marketplaces.

‘A slight lack of symmetry can cause so much pain’ is a limited edition NFT from Dmitri Cherniak, the creator of the coveted Ringers project. There are four NFTs in the collection which, as the name implies, explore how wrapping a looped string around a set of pegs can generate thought-provoking results. The Canadian artist and coder based in New York considers automation as his primary artistic medium.

Despite their cult status, none of the BAYC NFTs made it to the top 10 list last week. This Trippy, Angry Ape with a Bored Cigarette makes up for that. Early in June, it was sold for 42 ETH.

BAYC is a collection of 10,000 unique Bored Ape NFTs, each of which doubles as a Yacht Club membership card. It grants access to members-only benefits as the project crosses new milestones in its roadmap. BAYC has a trading volume of 174.9K and the floor price stands at an impressive 39.5 ETH as of now.

As discussed above, Ringers is a prized collection of generative artworks from Dmitri Cherniak. Similar to most of his famous works, it has a subtle yet simple underlying concept that explores the infinite number of ways we can wrap a string around a set of pegs to create a variety of combinations. The stunning abstract art is derived from a unique transaction hash and generated in Javascript in the browser. Each NFT is set apart by its peg count, sizing, layout, wrap orientation, and a few colorful flourishes. This particular piece is featured in a black and white palette.

Another Ringers NFT. This time, it features a recursive grid on a red canvas with 23 pegs. Minted eight months ago, it was shortly sold for as low as 2.5 ETH. It cashes in on the recent NFT momentum and Ringers craze with a steep climb.

Seems like Dmitri Cherniak has had quite a week. This is his 4th NFT on the list and 2/4 from the limited edition collection.

Finally, a CryptoPunk to save the project’s face. Launched in 2017, CryptoPunks is considered one of the most prized blue-chip NFT collections. It has a fixed set of 10,000 items in total. While it still reigns the market, generating $62.46M in trading volume in the last 7 days, it is evident that more projects and artists are giving it a run for its money. This Male Punk features a Hoodie and Smile.

The magnetism of generative art continues to influence the NFT market. While artists like Tyler Hobbs and Dmitri Cherniak have us thinking if algorithms surpass humans in abstractionism, artists like XCOPY restores faith in our aesthetic superiority through beautiful pieces of art. (Despite hurting the eyes, literally.)