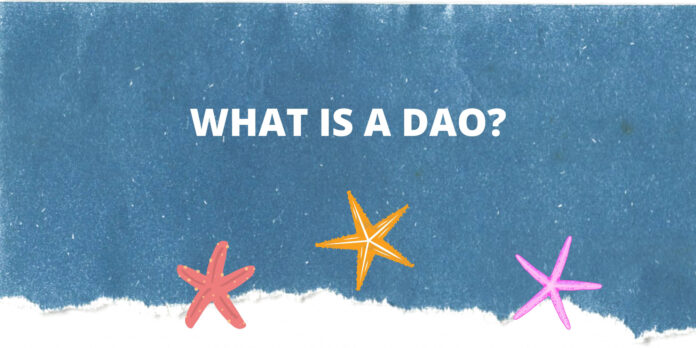 A few days back, a group of 17,000+ crypto enthusiasts took upon a challenge unlike anything seen before in history. ConstitutionDAO, as they like to call themselves, pooled together $47 million to participate in an auction at Sotheby’s for a rare copy of the Constitution of the United States.

Although ConstitutionDAO was outbid by hedge fund billionaire Ken Griffin, the  massive crowdfunding initiative managed to further fuel the debate around DAOs.

So, what is a DAO? A group chat capable of raising million-dollar funds, or is there more to it?

As rumor has it, will DAOs spell the end of traditional organizations?

What is a DAO

DAO stands short for Decentralized Autonomous Organization; An organization that is run by all its members, as opposed to a single commanding body. Here, people who have a stake in the project also have a say in its decision-making, staying true to the spirit of decentralization.

Although there are many blockchain, crypto, metaverse, and NFT projects today that flaunt the ‘decentralized’ tag, most of them fail to live up to its meaning. They are still on the path to decentralization. And it will be realized when the project is governed by a DAO.

It is also important to note that a DAO is different from the project ‘The DAO’. It is one of the earliest DAOs, launched in 2016. An unfortunate hack worth $50 million of ether left a stain on the project and the term.

So, don’t confuse DAO with the project ‘the DAO’.

Many prominent people have already begun to see the potential of DAOs. American billionaire entrepreneur Mark Cuban is vocal about DAO projects and has in fact invested in them; Klima DAO and Olympus DAO to name a few. Owing to celebrities and investors coming out in support of DAOs, the term has gained quite a lot of attention.

How does a DAO work

A DAO is governed by algorithms. A set of predefined rules go into its making, which are then updated as deemed relevant by the members from time to time.

Here, each stakeholder has voting rights based on the number of governance tokens she/he holds. They represent and track the investments of stakeholders in the DAO, and give them an opportunity to voice their opinions. Updates are approved only when consensus is reached through member voting. Many projects, although not exactly DAOs, have released governance tokens to users in the hope of moving to an administrative structure where users shape the future of the protocol.

Instead of a top-down approach, DAOs have adopted a bottom-up model of governance. Instead of legal contracts, they enact decisions through a series of smart contracts. These smart contracts are operated and executed autonomously on blockchains with little to no manual intervention.

This administrative structure is facilitated by an open-source code, which ideally cannot be manipulated by a few members.

How is a DAO different from a traditional organization

If you are thinking about starting a DAO LLC, the process is similar to setting up a traditional LLC except for a few factors. For starters, you need to establish the rules of governance and funding prior to launch. This can be changed later on, of course. But that will be a hassle, to say the least. Another key point to remember is that the establishment of a DAO may not be a collaborative effort like its operation. It should have a founder and a team who create it. The team is most often a part of the DAO even after launching, but that is not a prerequisite.

What are the pros and cons of a DAO

What are the different types of DAOs

Years from now, we will probably be laughing at this question. Just like there is a myriad of companies that deal with a variety of services and operations, DAOs can be implemented across industries, too. However, we have only begun to experiment with the model and its application in different sectors. They don’t fit all purposes given the lack of well-defined regulations.

For ease of comprehension, they can be roughly classified as protocol DAOs, service DAOs, social DAOs, investment DAOs, creator DAOs, collector DAOs, and grant DAOs. If a new industry adopts DAOs, we will classify them under a new head.

While protocol DAOs like MakerDAO, Sushiswap, Uniswap, and Compound help build a protocol, social DAOs reinforce collaboration and togetherness in communities. Investment DAOs, on the other hand, focus mostly on the returns. The LAO, a member-directed venture capital fund organized in the US, launched to support the blockchain ecosystem, is a great example. Although similar in many aspects, grant DAOs are formed to accelerate the progress of promising projects by providing financial assistance.

Service DAOs like PartyDAO, DAOhaus, Yam DAO offer specific services to users while working under a decentralized governance structure. There are also media DAOs like BanklessDAO that create content and share the profit among the members. We can say creator DAOs also work in a similar format.

We discussed a collector DAO in the article; ConstitutionDAO. If they came together to buy a rare copy of the constitution, there are many similar DAOs working in different parts of the world to collectively collect collectibles. This could be paintings, artifacts, antique assets, or even NFTs.

Related: What Is OlympusDAO (OHM)

The legal validity of DAOs will vary depending on the jurisdiction. Since blockchain and crypto are relatively new to the world, it will take time for the law reforms to take shape. When Wyoming became the first US state to legally recognize DAOs as a separate entity, it was not just a historic moment for the US, but also the entire crypto community spread across the globe. It is expected that more states and countries will follow in the footsteps once the authorities overcome their fear of decentralization.

Currently, lawmakers are giving DAOs a silent treatment. But with the ongoing cry for crypto regulations, DAOs are also likely to fall under the legal radar. Only then will we get clarity on the rights and obligations of the DAO, team, and stakeholders, whether it can sue and be sued, and enter into contracts.

DAOs replace run-of-the-mill hierarchical management by a novel and decentralized governance structure. Regardless of how regulatory bodies perceive DAOs, they are going to go mainstream in the long run. Just like the ideas of democracy, liberation, and justice have prevailed. Let’s hope that industry resolves its shortcomings and sharpens its capabilities for a world that is ready to be decentralized.

Related: Kolibri DAO And The Evolution Of The Tezos DeFi Ecosystem