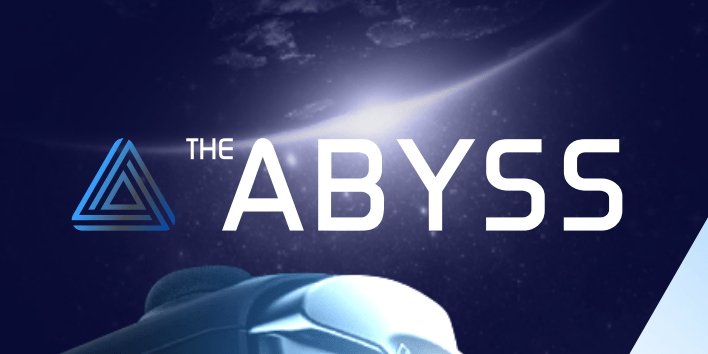 Video games are more prevalent than ever before in the industry, to the point where consoles, computers, tablets, mobile phones, or even smartwatches can be used to access and enjoy this form of entertainment by anyone, anytime.

Likewise, the growth in this area has been significant over the past decades, evolving from relatively simplistic video games such as Tetris to reality augmented games capable of whisking you off into a parallel world by simply strapping on a helmet.

Video games are here to stay, and every day there are more options available on the market, a fact that will doubtless leave developers with the laborious task of making their products stand out from the crowd.

Consequently, the gaming industry is now allocating at least half of all earnings for advertising efforts, which of course, represents a huge inversion, and what’s more, the more the market grows, the more significant these costs are. It has become clear that it is time for the market to evolve!

The next generation of digital distribution platforms is a reality and, as expected, it goes hand in hand with the technology that has been shaking the whole world with incredible features and applications. We are speaking, of course, of the cutting-edge technology known as the blockchain.

The Abyss is a next-generation digital distribution platform that will harness the advantages of blockchain technologies, while offering an optimal space for both gamers and developers.

The platform was designed by Destiny.Games, who have been engaged in the localization and development of online games since 2008. It currently boasts a user base in excess of 20 million people, an impressive achievement by any standard.

The Abyss envisions, with the integration of blockchain technologies, to be able to deliver a wide range of video games including cryptogames, AAA-titles and free-2-play MMOs, the latter being a key priority.

The project is adopting the DAICO concept

The Abyss is looking to become the world’s first project to test Vitalik Butrin’s “DAICO” concept. DAICO is an innovative fundraising model that merges the benefits of Decentralized Autonomous Organizations (DAOs) and traditional ICOs. By design, DAICO aims to upgrade and make the initial ICO concept more transparent and secure.

It provides greater control for the token holders, giving them refunding options in case of dispute regarding a project’s progress, completely mitigating the possibility of scam ICOs.

The Abyss application of DAICO

The Abyss will apply the DAICO fundraising model on a token sale starting from April 16, 2018, at 14:00 UTC. The project is aiming to distinguish itself from numerous industry ICOs by adding a voting system, which will be 100% controlled by the DAICO smart contract. It is through a voting system that the team will be able to raise its monthly budget needed to support the platform development and other project purposes.

To read more on the DAICO smart contract, visit here.

Regarding what The Abyss plans to do with the funds collected on the Token Sale, a scheme has been made establishing two different distributions for different caps.

On the soft cap, 40% will go to the development of the project, 25% to marketing investment, 20% to infrastructure and software, 10% to legalities, and 5% to create a reserve. 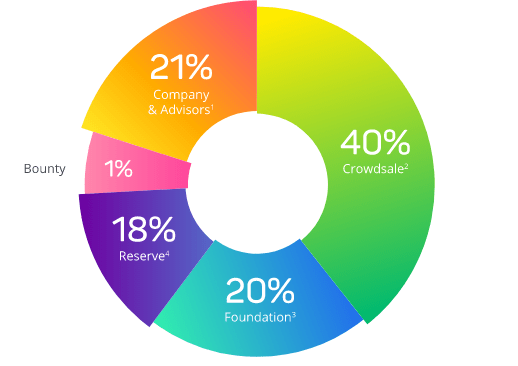 On the hard cap, 30% will be invested in marketing, 25% in development, 20% in infrastructure and software (incl. CDN, DRM), 15% in video games development and distribution, 5% in legalities, and finally, another 5% goes to reserve. 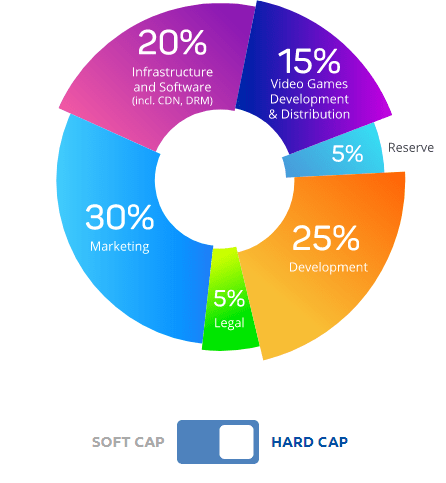 The Abyss seeks to provide a significant number of benefits that regular game distribution platforms do not currently offer. Among the advantages are:

Referral program for gamers and developers

Through these programs, The Abyss offers a system of rewards for individual game achievements, as well as a monetization scheme for each bit of content a user generates (reviews, streams, videos, fan art, etc.) as well as compensation for accomplishing a given task assigned by a developer. 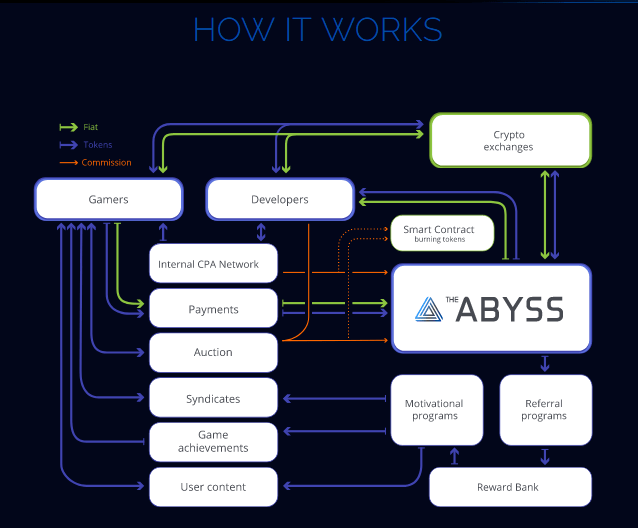 Internal CPA Network is a system for developers to manage and exchange traffic. Developers can sell useless traffic to other games that can make use of it, and in doing so, they can recoup expenses.

The auction of in-game items allows the selling of collected in-game items to other gamers and the purchase of items sold by other players. The auction is not restricted to games: with the permission of the developer, users can sell any item they wish.

It is planned for there to be united game activity, allowing individuals to gain additional joint income.

The Abyss will accept payments both in platform-specific ABYSS tokens, configured under the ERC-20 protocol on the Ethereum blockchain, and fiat money. Users are offered a discount for game purchases when using ABYSS tokens.

The Auction, Motivational and Referral programs, and Syndicates and Internal CPA Network rely on ABYSS tokens only. Furthermore, 1/3 of the platform’s commission from the Internal CPA network and the auction transactions is burnt by smart contract.

Moreover, The Abyss has recently released the MS Windows version of a prototype which includes some of the functionalities of The Abyss digital distribution platform; brand-new features and further improvements are actively being developed.

The roadmap for the next three months, assuming everything goes to plan, includes: 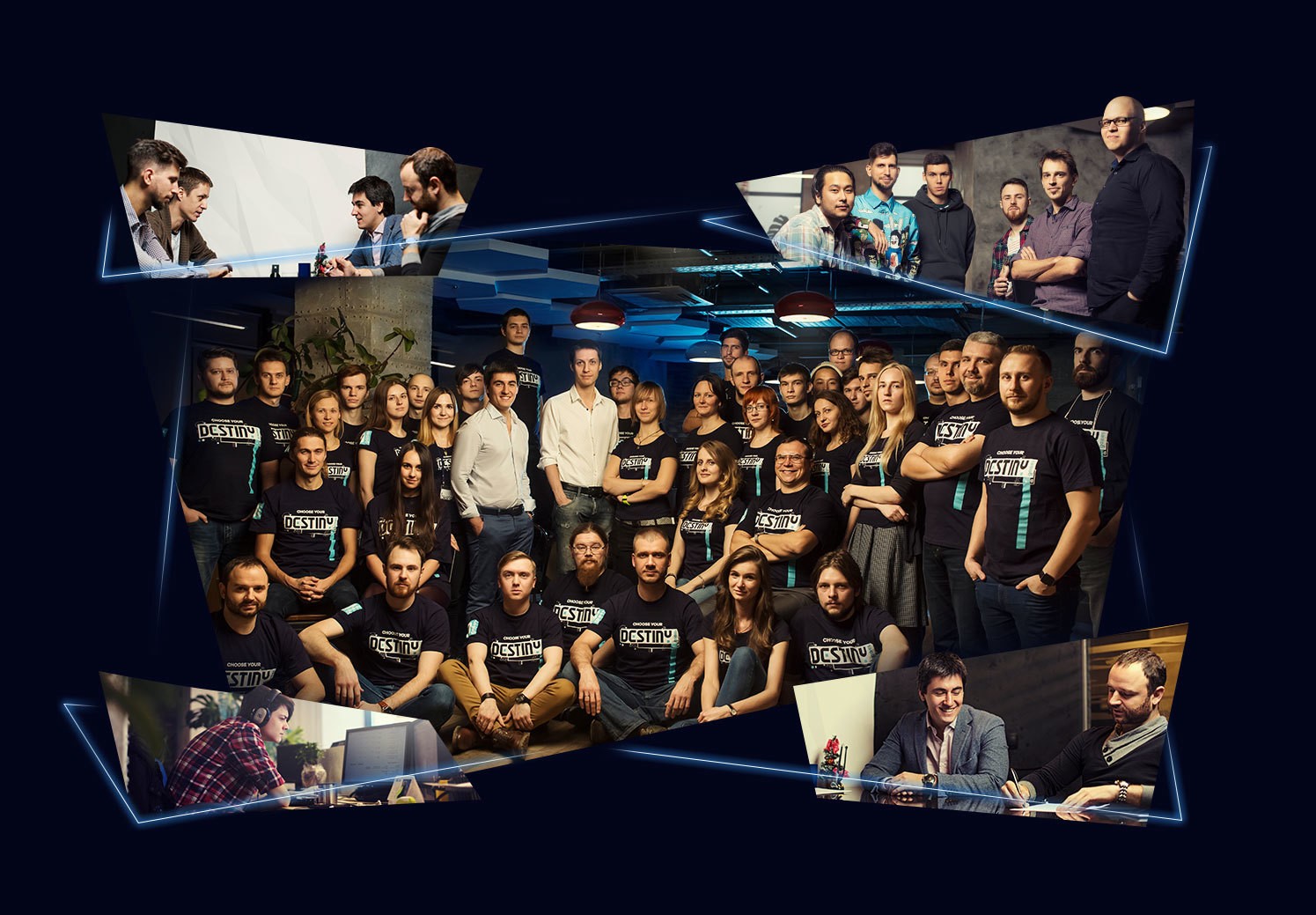