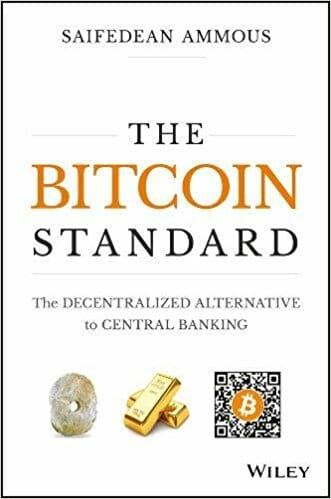 By Simon Cocking. Review of The Bitcoin Standard: The Decentralized Alternative to Central Banking, by Saifedean Ammous available from Wiley here.

Publisher’s quote from Wiley about the book “When a pseudonymous programmer introduced “a new electronic cash system that’s fully peer-to-peer, with no trusted third party” to a small online mailing list in 2008, very few paid attention. Ten years later, and against all odds, this upstart autonomous decentralized software offers an unstoppable and globally-accessible hard money alternative to modern central banks. The Bitcoin Standard analyzes the historical context to the rise of Bitcoin, the economic properties that have allowed it to grow quickly, and its likely economic, political, and social implications.”

This book offers value in a few ways, and is overall a good, useful book to read. Though at times it also manages to get in it’s own way too sometimes. The first part of the book does a solid job in explaining the historical context of measuring and transmitting value from one party to another. There have been various payment methods over the millennia, some working better than others, and some lasting longer than others. Gold comes out as one of the near perennial best bets for holding and storing value. There is a limited amount of it, it is also useful for many purposes, and is quite hard to destroy. All of which help to counter the issues of over production, inflation, and, ultimately, government interference. This historical context is explained well and the book does a good job of preparing the ground for the modern context in which bitcoin eventually emerged.

One small criticism would be that, like a movie waiting for the hero to come on screen, perhaps it takes a little too long for us to move from the historical context to the  ultimate first mover in the crypto space. However it is useful information and worth knowing. The second, larger concern is when he moves into what ultimately becomes a rant against modern art, and Rothko and Jackson Pollock in particular, which suggests his dislike of abstract art is quite strong. This becomes such a venomous diatribe eventually as to begin to undermine his credibility on the financial issues too. Suffice to say his comments on the modern art movement in the post war period are ultimately unhelpful and counter productive to a discussion on the value of decentralized currencies.

Fortunately however his final section on ‘Bitcoin Coin’ questions is back on topic, and is useful, helpful and informative. Here the author covers a wide range of frequently asked questions about bitcoin, blockchain, and it’s ability to deal with potential challenges lying ahead for it. As we are all aware the cryptocurrency market still has some way to go, to iron out the kinks and problems it still experiences. However overall, much like Churchill’s evaluation of democracy, moving forwards Bitcoin may well be the best alternative to decentralized banking that humanity has developed so far.