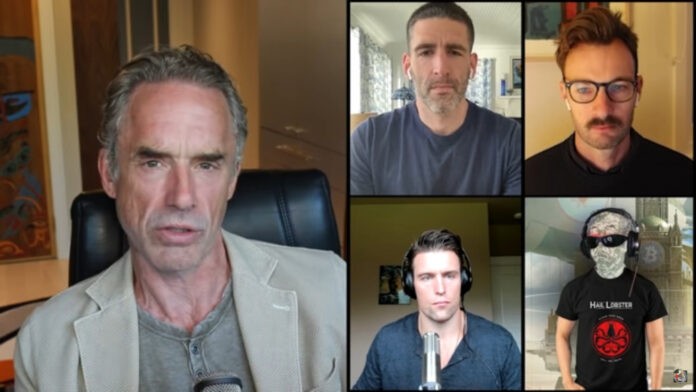 On the last instance of his weekly podcast, Prof. Jordan B. Peterson invited four Bitcoin philosophers who meet regularly for a Bitcoiner Book Club.

"The evolution of money… has been to try to find something that mimics our limitations, that mimics the sacrifices we make when we bestow value on something." – @johnkvallis

A deep dive into the potential of Bitcoin from my most recent podcast. pic.twitter.com/GwVeb07jwA

Die-hard Bitcoiners often say that Bitcoin made them figuratively fall down a rabbit hole. Peterson wanted to know how this psychological transformation looks like. John Vallis, host of the Bitcoin Rapid-Fire podcast, had an answer, likening the psychological effects to Peterson’s teachings:

A lot of things you talk about are represented in the changes we’re seeing in people who engage in Bitcoin. What I’ve noticed in people in Bitcoin is that it rapidly accelerates this change toward taking more responsibility.

Vallis expects this heightened sense of responsibility to spill over into other areas of life. He goes on to explain that this change is reflected in a change of time preference, as well as creating a new way to think about ownership:

It’s an extreme form of ownership that is not represented in any other domain of life. It’s an inherent property right.

Although Peterson doesn’t see himself as part of the wider crypto community, this point made him curious. He proclaimed:

It’s a very interesting idea that, in some manner, Bitcoin provides an incorruptible language of value, preferable to gold. [But first], you need to buy the argument that gold is preferable to a currency that is not dependent upon something like gold.

Richard James: Ethics can be derived from Economics

Next up was filmmaker Richard James, who created the documentary Hard Money. He explained what he learned from the philosophical theory of the Austrian School of Economics, also dubbed the psychological school.

There’s a certain way of thinking in Austrian Economics called Praxeology, which is about human action and analyzing the way people pursue [their goals]. From that, we can draw a whole lot of deductions […] that lead you down an ethical framework as well and that’s where I guess your own work came into it.

As a psychology professor and author, Peterson also gives moral guidance, such as in his book 12 Rules for Life. He stated to be interested in Austrian Economics himself and to explore this philosophy further in upcoming podcast episodes.

Robert Breedlove: Inflation is a corrosive moral Cancer on Society

Robert Breedlove, a former hedge fund manager and host of the What is Money? Show, explained the interplay between economics and ethics in more detail. He stressed the importance of a monetary system based on scarcity:

Money is essentially a contract of the future and today’s fiat currency is a violated social contract. So we have a money [system] by which an institution effectively robs our future. They’re compelling the demand for this money and they’re violating its supply to enrich themselves and dispossessing everyone else.

He likened central bank induced inflation to a social disease that takes over all aspects of society. As examples, Breedlove referred to the website wtfhappenedin1971.com, which shows a compilation of graphics that show impressively the effect the worldwide abandonment of the gold standard had after 1971. He explained:

if we don’t have a secure social contract for the money system, we can’t possibly have a foundation for a sound social morality. It causes people to be more short-term thinking. When your money doesn’t hold value over time, you can’t create trusting long-term relationships.

The fourth member of the Bitcoiner Book Club on the podcast was Gigi Der, Bitcoin coder and author of 21 Lessons: What I’ve Learned from Falling Down the Bitcoin Rabbit Hole, who took a more technical approach. He talked about the hardships we had to overcome to create a sound digital money system that ensures scarcity similar to gold and silver:

It’s a problem computer scientists tried to solve for I guess 50 years plus. If you want to have something in the informational realm that represents value, it’s basically impossible because you can copy information indefinitely and that’s what’s described by the double spend problem.

He moved on to elaborate how crypto assets change the way we perceive ownership:

Gold coins for example speak for themselves, like whoever has the gold coin is in possession of this value […] and can go to society and redeem it. In the digital realm, doing that without any trusted third party before Bitcoin was impossible because of this double spend problem.

In total the discussion between Prof. Peterson and the four Bitcon philosophers lasted for almost 90 minutes. Therefore, we can only give you a short outline of the podcast, which is highly recommendable to watch in its entirety.