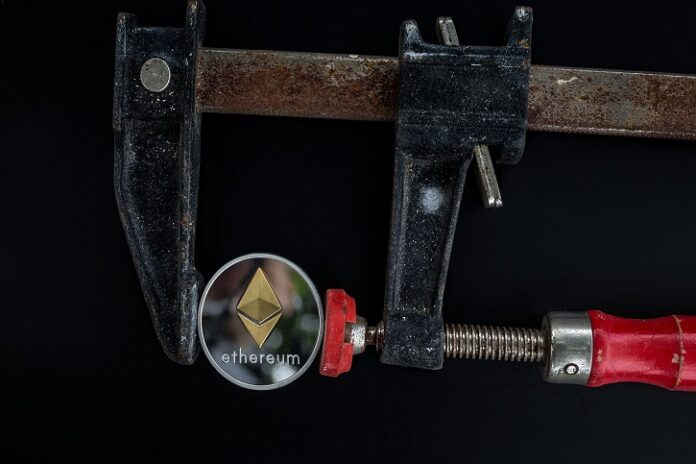 Ethereum is undergoing a stern test of its resolve at the moment after the coin price tumbled overnight on August 14th to a spot value of $256.58. That movement carries ETH all the way back to the quiet days of September 17th, 2017 – months before the market surge at the dawn of the new year.

With last night’s price drop it’s almost as though the spike of December-January never happened, with Ethereum retracing to 11-month lows. If there is any consolation to be found for Ethereum at the moment, it’s that this morning’s price of $256 was previously the lowest low that ETH sunk to before it went on its major bull run up until early January.

Of course, that’s when the entire market (Bitcoin) rose at the same time, so such signals of hope are still purely speculative at this point.

Last night’s tumble by Ethereum was really the culmination of a descent which had been in place since late July. The entire month of August so far has been dreary for the coin, with ETH losing 39% in the last two weeks alone. Yes, you read that correctly.

As you can see from the chart below, the loss came in steps, with the price first of all hovering around $410 for the first week of the month. Then came a sudden step down and a brief consolidation at the $360 range.

When the next dip came on August 11th, the coin price eventually levelled out at the $320 support, but as you can see, over the next two days that support completely disappeared, sending Ethereum to the 11-month low of $256.68.

Since then there has been a slight rebound, as the coin climbs back up to the $265 range. But the question now becomes whether or not we’ll see another of those stepped declines. Given the pattern shown by ETH in the last two weeks, we can expect to see a shortfall of around $40-$50 from its value, meaning Ethereum would be testing $220 before the current week is out.

Perhaps surprisingly, the highest concentration of Ethereum trades has come against USD in the past 24 hours, with Bitfinex acting as host to $124 million worth of ETH/USD trades. A similar sum of $100 million on Coinbase Pro suggests that many people lost faith in Ethereum last night. Ether that or they forgot to change their sell orders.

If we exclude direct USD trades however, we see that the highest volume of trades has undoubtedly come against USDT Tether, with north of 20% coming from various exchanges.

Ethereum isn’t the only coin to be nursing wounds this morning, as multiple altcoins are now edging further and further back into the price-realm of 2017. Both TRON and IOTA have fallen out of the top ten in recent days, with TRON falling 44% in the last week alone.

IOTA has fared even worse, with 50% losses over the last seven days, sending MIOTA coins to a unit price of $0.40 – a price not witnessed since early November of last year. At the time of writing, Cardano is down 19% for the day, while EOS, Litecoin and Bitcoin Cash are all feeling the brunt of 15% losses.