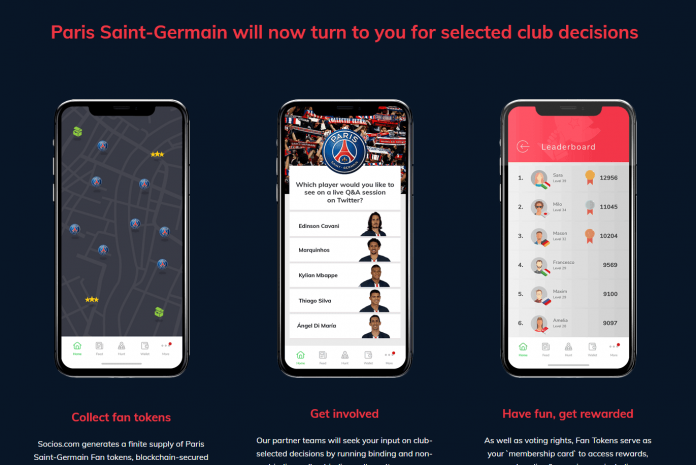 French footballing powerhouse Paris Saint Germain (PSG) F.C. yesterday announced its entry into the crypto space with the launch of its very own $PSG token.

The most successful club in French history has an estimated 35 million fans worldwide. According to the announcement, those fans will now be able to interact directly with the club via polls and reward points:

“The Fan Tokens of $PSG are now on sale for a limited time! These allow you to vote in polls related to your club and compete for unique experiences.”

Malta-based cryptocurrency exchange chiliz.net is behind the collaboration. Chiliz has already signed several big-name football brands, including Italian clubs Juventus and AS Roma, as well as the English Premier League’s West Ham.

Fans can reportedly get involved with club-related decisions through “binding” and “non-binding polls” using the mobile Socios app.

Bitcoinist reports that $PSG will have a supply cap of 20 million tokens with an initial cost of £1.69 ($2.19) per token. The sale will boost PSG’s bottom line by a hefty $43.8 million, provided all tokens are sold out.

Other benefits via the rewards program include free match tickets, the opportunity to meet individual players, and possibly winning official signed merchandise.

There appears to be a new gold rush in professional sports as top-tier franchises look to take advantage of the technology and the hype surrounding blockchain.

Only two weeks ago, progressive basketball team the Sacramento Kings announced the very first blockchain-powered auction platform. Elsewhere in the NFL, the Miami Dolphins announced not long ago that Litecoin would be their official cryptocurrency.

We are excited to announce Litecoin as the Official Cryptocurrency of the Miami Dolphins! 🏈

Litecoin Foundation is partnering with @MiamiDolphins and @AliantPayment to allow NFL fans to #PayWithLitecoin.

However, a word of caution is necessary here. Blockchain tokens have a reputation of losing value quickly. Sporting tokens should probably not be considered an investment.

Their primary purpose, at least, in this case, is for fans to interact with, and possibly influence the decisions affecting their favorite teams and players.