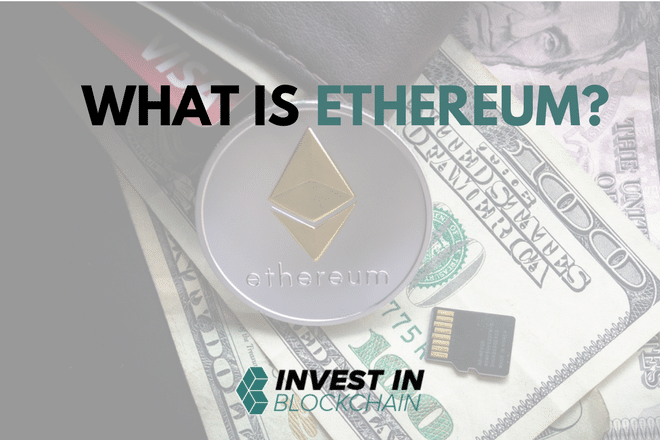 Everything you need to know about Ethereum, explained in a four-part series, by Colin Adams

Part 1: The History of Ethereum

At its most basic, Ethereum is an open-source software platform based on blockchain technology. This platform enables developers to build and deploy decentralized applications (dapps) like Status or Metamask on it. All of this is possible because of a breakthrough in blockchain technology (as popularized by Bitcoin), and then Ethereum came along with some new ideas.

As the two biggest cryptocurrencies (by market cap), Bitcoin and Ethereum often get mentioned in the same sentence. For the uninitiated, understanding what Ethereum is and how it differs from Bitcoin can be difficult.

On the official website under the tagline “build unstoppable applications”, you will find the following description of Ethereum:

A decentralized platform that runs smart contracts: applications that run exactly as programmed without any possibility of downtime, censorship, fraud or third-party interference.

Another common description of Ethereum is that it’s intended to become a “world computer”.

If none of the above makes complete sense to you, don’t worry, that’s the purpose of this series of articles. Think of this as Ethereum 101, wherein we answer all the most important Ethereum-related questions, chart its history, provide some technical explanations, discuss pros & cons, and lay out what the future might look like.

The history of Ethereum

Who is Vitalik Buterin?

Ethereum started with one person, and that person is Vitalik Buterin. Unlike Bitcoin, Ethereum has a real name attached to it, a leader if you will. Buterin is a Russian-Canadian programmer and writer primarily known for his work with Ethereum and as a co-founder of Bitcoin Magazine. Involved in Bitcoin since 2011, he is also known as the developer of a fork of bitcoinjs-lib as well as one of the developers behind Egora, a cryptocurrency marketplace site.

But Ethereum is what truly propelled Buterin to fame. He came up with the idea for it at the ripe old age of 19. Instead of returning to university (he was studying computer science at the time), he began developing it full-time after receiving the Thiel Fellowship.

He now leads Ethereum’s research team, gives keynotes, and meets world leaders. He essentially lives on a plane, traveling to events and meetings all over the world, evangelizing and working to grow Ethereum.

The early days of Ethereum

Now that you know a bit about Buterin, let’s look at what he did. In 2013, while working on Bitcoin, he noticed that it lacked its own scripting language for application development. He argued that this was a huge opportunity that needed some action; when he failed to receive broad support for this idea, he began writing his own white paper.

Released in late 2013, the Ethereum white paper outlines his vision to “provide a blockchain with a built-in fully-fledged Turing-complete programming language that can be used to create ‘contracts’.

These contracts he was referring to are the ‘smart contracts’ that Ethereum has become famous for. A smart contract is simply a self-executing contract written into code that is stored on the blockchain. They render transactions ‘traceable, transparent, and irreversible’ (more on this later).

Buterin formally announced Ethereum at the North American Bitcoin Conference in Miami, January 2014. He’s said many times that he expected people to quickly point out all the ways in which he was wrong. But to his surprise, many people warmed to the idea and momentum started to gather behind his fledgling project.

As credence was given to Ethereum, a nonprofit foundation, the Ethereum Foundation (Stiftung Ethereum), was created to guide development. This development was funded by a crowdsale that kicked off in July 2014.

This was the first initial coin offering (ICO).

Ethereum also introduced its own native token called Ether (ETH). ETH is the currency which runs everything in the Ethereum ecosystem. During the ICO, the Ethereum Foundation distributed the initial allocation of ETH via a public pre-sale, making 31,591 Bitcoins (worth $18,439,086 at that time) in exchange for about 60,102,216 ETH.

In the intervening years, developers flocked to Ethereum to work on the core technology and build their own applications on top of its blockchain. According to State of the DApps (a not-for-profit curated directory of Decentralized Applications on the Ethereum Blockchain), there are currently over 950 projects running on Ethereum. The main technology itself has already run through a few versions with Metropolis 3.5 on the horizon. The ETH token also went from being worth mere cents to well over US$1,000.

Countless ICOs (fundraisers) were held on the Ethereum blockchain and this trend looks set to continue for the foreseeable future. But there were, of course, some speed bumps too. One event, in particular, threatened to take the entire Ethereum project into the ditch.

To understand the history of Ethereum you need to know the story of The DAO. DAO stands for Decentralized Autonomous Organization, an entity that runs on rules encoded into smart contracts on the blockchain.

Founded in 2016 by Christoph Jentzsch, one of these organizations (conveniently called The DAO) caused some serious waves. The DAO was a complicated smart contract whose aim was to create a decentralized venture fund that could seed venture capital into various dapp development projects.

The code of The DAO was supposed to eliminate the need to trust humans in that it could function autonomously. But humans, as it turns out, were tough to remove from the equation.

To understand how The DAO worked is relatively straightforward. If you wanted to influence the direction of development, you had to buy DAO tokens with ETH. To get funding, someone would present a proposal which was then voted on. To move forward, it was required to get 20% of the vote from all of DAO holders. The more money you’d put into the DAO, the more weight you held at the voting table.

There was a lot of excitement around this idea and investors rushed to buy up tokens, investing over $150 million at the crowdsale (a record). However, no sooner had that happened than The DAO was attacked or otherwise hacked (what exactly happened is debated).

On June 17th 2016, someone exploited a known loophole in The DAO (a vulnerability in the default smart contract code) and drained one-third of the funds held in The DAO. At the time, this was around $50 million. How exactly this occurred is beyond the scope of this article but if you’re curious, there is an excellent piece detailing the full events on medium.

This was a dagger blow to a technology only a few years in existence. Ultimately, the Ethereum community decided on a solution that would, in effect, erase this attack.

In blockchain parlance, a hard fork is “a radical change to the protocol that makes previously invalid blocks/transactions valid (or vice-versa) and as such requires all nodes or users to upgrade to the latest version of the protocol software.” You may also sometimes hear mention of a ‘soft fork’, a change to the software protocol where only previously valid blocks/transactions are made invalid.

Here’s a short explanation of blockchain forks in a nutshell:

The hack of The DAO resulted in a hard fork. The community voted to roll back history and make the record show that the attack never happened. This was a major change, and not everyone agreed.

This proposal was controversial and it created the division that has resulted in two branches of Ethereum which are essentially two versions of the same original network. The Ethereum that we know today includes the majority of users and heavy hitters (including Buterin) who wanted to adopt an altered transaction history. On the other hand, there is Ethereum Classic, the vocal minority who didn’t like the idea.

Ethereum Classic may not have gone on to the heights of Ethereum itself but it certainly hasn’t died either.

Regardless of what you think of all this, it proved that Ethereum as a whole was resilient. With the most important historical points outlined, let’s back up and cover a few basics. Getting these core concepts down allows us to understand exactly how Ethereum works.

Every time someone wants to send Ether to another person or execute a smart contract, this entire decentralized ledger must record and confirm the accuracy of the event. This critical task is not carried out by people or a company, but by thousands of computers all over the world that are connected to the Ethereum network. These computers are usually what people are referring to when they say ‘miners’.

The name itself is actually quite misleading; a more accurate term might be ‘transaction processors’. To make sure that transactions are securely and properly recorded requires computers to use a huge amount of computing power to solve complex algorithmic problems, and do so as quickly as possible to get a reward (paid in ETH). This is Proof-of-Work (PoW) and it ensures the integrity and vitality of the network as a whole.

But PoW has some drawbacks, most notably that it consumes an enormous amount of electricity and is highly competitive. This has made it cost-prohibitive for most people and arguably driven the power into a select group of mining pools. In other words, it’s become somewhat centralized.

In August 2017, Buterin announced plans to move away from PoW.

In the proposal (sometimes referred to as Casper), he stated that Ethereum would transition from pure Proof-of-Work to hybrid PoW or Proof-of-Stake. As opposed to the PoW consensus protocol, the PoS protocol validates transactions through the efforts of validators, stakers, or forgers (people call them many different things) who put up their coins by locking them down in specialized wallets. With PoS, these parties or computers commit money to the system with the understanding that they will lose their deposits if they don’t follow the rules.

Unlike Proof-of-Work, where the algorithm pays miners who solve mathematical problems with the goal of validating transactions and creating new blocks, Proof-of-Stake allows validators to place bets on which block they think will be added to the chain. If the validator is correct, they are rewarded (by a deterministic algorithm) in proportion to their bet or ‘stake’.

The result of Casper is (among other things) meant to be a Bitcoin-style Proof-of-Work mining blended with a much-anticipated and still-experimental Proof-of-Stake system. This means that Ethereum will begin oscillating between the two, and ultimately become dependent on PoS to arrive at consensus across its network.

Supporters of Casper hope the change will bring about a more eco-friendly protocol. Meanwhile, detractors point to the fact that its release has been pushed back numerous times as evidence that PoS won’t ever be truly successful on Ethereum. Others stress a more important issue: security (considering that the network holds billions of dollars of value). Developers have claimed that PoS will be more secure.

At the time of writing, Casper FFG has been released on testnet. FFG is scheduled to be implemented on the main network when the second half of Metropolis is launched, (The first half is called Byzantium and second half will be called Constantinople).

Full-PoS Casper is still a ways off. But the first steps to getting Ethereum positioned for true scalability have been made.

In part two of this series, we’ll be looking at how Ethereum works, the problems it was designed to overcome, and its limitations.