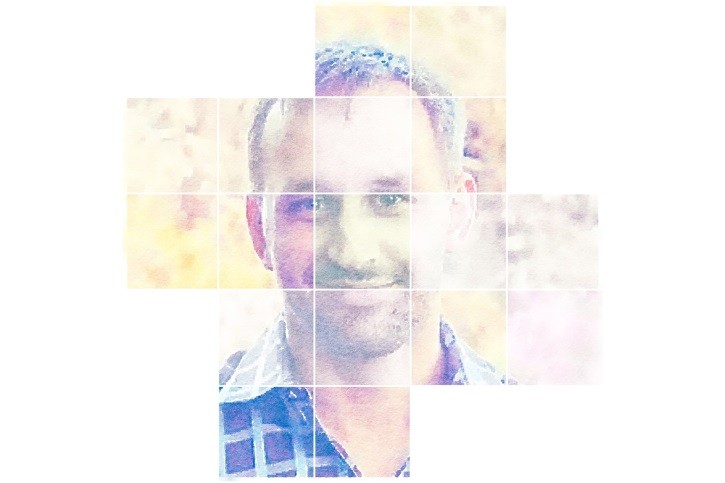 Q & A With Dmitry Buterin |Cryptoeconomics, Vitalik, and Philosophies

The phenomenon surrounding cryptocurrency is vast and chaotic sometimes. It is a baffling and brand new science that is largely dominated by puffed up promises of trips to the moon by flashy self-named experts. Cashing in on the Lambo-hype is not the same as contributing to the brilliance of the era of the blockchain.

The most baffling of all pieces of the crypto-puzzle is perhaps in the minds of the founders, developers, and creators of successful, original blockchain projects.

With a constant stream of gimmicky start-ups and a plethora of Initial Coin Offerings, or ICOs, cluttering up the news feeds, there has been a cloudy sense of disarray in the crypto-space. The madness felt in the first part of 2018 was further sprinkled with mania when the value of Bitcoin and Ethereum dipped to sickening lows after such thrilling heights this year. As the market has come back to a nice, steady upward climb, and the fog is beginning to lift, many people are left wondering what they should veer towards, in the new calm after a costly storm.

Perhaps, collectively, the crypto-community has given too much weight to the complexity of it all, and instead, maybe it would be best to approach “the space” calmly. Quit frantically grabbing at the trendy coin of the day, and slow down.

One of the few leaders in the cryptocurrency crowd that many people look to for wisdom and advice is Dmitry Buterin, father to Ethereum’s creator, Vitalik Buterin. Dmitry is a humble thought leader who has a list of achievements that would make anyone’s jaw drop. Needless to say, it is a great honor to publish this exclusive (and hard to get) Q&A session that happened in the Linkedin playground. I got the scoop on Dmitry’s “secret sauce”, along with some profound nuggets of wisdom on life, parenting and self-awareness all from the man who is at least partly responsible for countless improvements to the modern world. Read on to learn more about the humble genius who is so much more than “The Ethereum Dad.”

Enjoy This Q & A With Dmitry Buterin!

You, along with Ameer Rosic, created a great resource for a wealth of knowledge, gathered from the collective user base. How involved are you in the increasingly popular site Blockgeeks.com?

I am a co-founder and was working closely with Ameer to get this started – developing the concept, project managing website work, participating in content editing etc. Now I am an investor and mentor/advisor to Ameer and the team (10 people now), not involved day-to-day.

You have many accomplishments on your resume, it’s hard to know which to mention. Please name your recent or favorite projects.

I am a single-minded guy and at a given point in time I am not keen to work on more than one, max two projects. In the fall of 2017, I sold the business Wild Apricot that I co-founded and led for 11 years as the CEO. Its software for small nonprofits, we have over 10,000 of them using our platform. Very proud of what we have achieved and of the fact that I was able to make myself redundant and when I sold my shares, my team took over quickly and I was out in less than 3 months. (Typically, businesses are very dependent on their founders and buyers request the seller to stay on for 12-18 months).

On your personal site www.buterin.com I found your friend Philip McKeran. What do you think he meant by this: “Your self-worth will dictate your net worth.”

What we manifest in the outside world is a reflection of our inside, our personal foundation. Struggling to achieve certain results in the business, to lose weight, to change your relationship? Look inside and work on yourself, don’t blame others/circumstances (or self).

Just curious: What’s currently open on your desktop right now as you reply to me? What programs or games?

I rarely play games and when I do, it’s typically puzzles, like Candy Crush (did you know that those are very good for helping people deal with trauma btw?) Ok. Open now is my browser (Chrome) with a couple dozen tabs, Microsoft Outlook, Evernote.

Have you ever found it challenging to be the head of a famous family?

This definition does not really resonate with me. Vitalik is famous, true. But he is an independent individual and lives his own life (He is home in Toronto maybe 3-4 times a year). Otherwise, we are just a regular family. I have my journey, my wife has hers (we worked together for many years though, until recently). Our young daughters have their lives and we support them.

Blockchain technology is rapidly becoming the preferred technology for many big name brands. Do you see this as a positive thing?

I think, for the most part, big brands are just paying lip service to it. I am not aware of any big brand doing anything significant on the blockchain. Lots of announcement and lots of pilot projects but the tech itself is very immature so not even suitable for large-scale businesses yet. 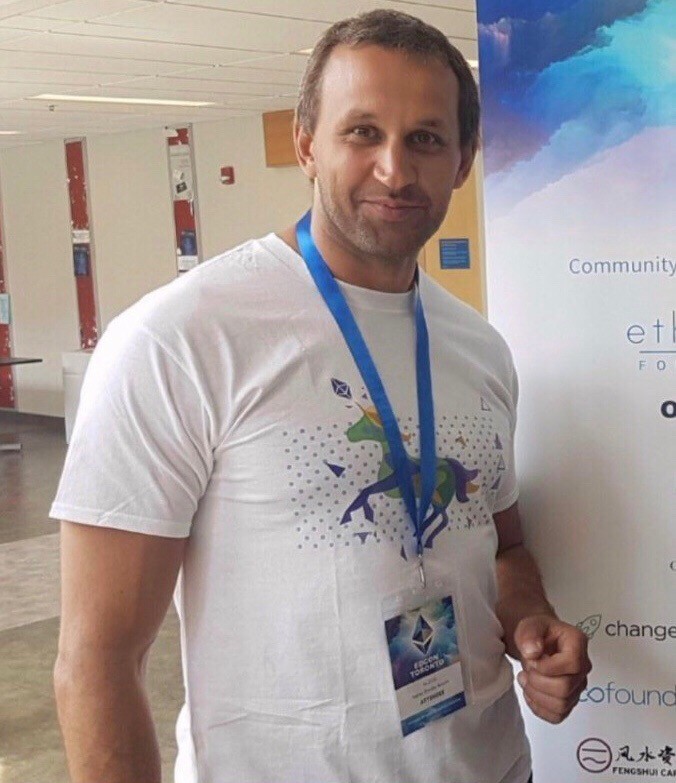 I am a rabid anarcho-capitalist. I see it helping create much more distributed, decentralized world, with many fewer centralized decision makers and intermediaries. I see many of our current problems stemming from the fact that decision makers are far removed from the local situation and are not impacted by the consequences. -Dmitry Buterin

In what ways do you see the world improving because of the technology in cryptocurrency and other blockchain projects?

I am a rabid anarcho-capitalist. I see it helping create much more distributed, decentralized world, with many fewer centralized decision makers and intermediaries. I see many of our current problems stemming from the fact that decision-makers are far removed from the local situation and are not impacted by the consequences. They think of themselves as brilliant, as gods – when they really have no clue. Central banks had no clue about the financial crisis of 2008. And the solutions they implemented afterward have actually created even more risks. Politicians constantly start new wars and bomb people because they think the world will be better off – and that’s never the case. So I see the blockchain tech as giving more power back to the market, to everyone. I trust the cryptocurrency tech and community (even with all the scammers and greedy bad actors) to give us better money than the central banking system printing money uncontrollably.

How should the average person who has no knowledge of cryptocurrency or blockchain approach their entry into the space? What is the first thing you would point to if someone wants to know more?

I always suggest that they buy some cryptocurrency (say, BTC and ETH) ASAP – only using the money they can afford to lose! Once they have some, they will be much more motivated to learn more about it. I have seen that many times. Then read up – lots of great online resource, books, videos. Our own blockgeeks.com has tons of great free materials in the Guides section. https://blockgeeks.com/guides.

I have seen you say that you are not a blockchain expert. What qualifies a person to be considered an “expert” in the arena of cryptocurrency and/or blockchain?

There are very few true experts in this. It’s such a new area (I really like the term Cryptoeconomics coined by Vitalik), intersecting various technologies, math, cryptography, economics, psychology etc. So I think most self-proclaimed experts are full of hot air. They might be a few steps ahead of an average person but that does not say much. Vitalik has admitted he had no clue cryptocurrency would blow up in 2017 the way it did. Look at all the mistakes being made, hundreds of millions of dollars wiped out by security bugs and coding mistakes just in 2017! Look at the ICO craze, my gut feel is that 99% of those projects are stillborn.

What is your favorite food to enjoy with your family, during a holiday?

I can’t think of one particular dish. We all are pretty healthy eaters (Vitalik being the healthiest). Well, maybe two dishes: baked salmon and baked duck.

What’s the secret ingredient to your brilliance? You clearly passed it on to your son, Vitalik Buterin, so is it genetic or is it taught? As a mother, I am curious.

I would like to claim some magic sauce but I think its genetics first. We’ve met with Vitalik’s mom Natalia at the university, studying computer science so we clearly both have pretty decent IQs. I do hope that we have contributed to his worldview as he was growing up, I remember interesting debates with him as he was growing up being brainwashed by a very “socialist” Canadian public school system and I had my capitalist and libertarian views. (I grew up in the Soviet Union so I had lots of first-hand experiences of where we end up with socialism and centralized systems).

What do you predict for Ethereum and Bitcoin, for the rest of 2018?

I expect lots of volatility but overall uptrend. I don’t have much insight into Bitcoin but I do know of lots of stuff happening with Ethereum. The platform itself will become much more robust, with PoS, sharding, Plasma and many other initiatives. Lots of actual decentralized apps will be coming online and while most of them will fail (I think at customer adoption), we will learn a lot from them.

If you could speak to the audience on any topic at all, what would you say to the readers? Feel free to say anything you want – “crypto” or not. Say what you want.

I would implore them to keep learning – and the most important subject of learning, in my opinion, is ourselves, how our brains, minds, thoughts, emotions work. Self-reflection and self-awareness are key to not just achieving stuff (and then realizing you are not feeling any better) but to being a happy, fulfilled person and making the most of your impact on this world.

It is fascinating that in the midst of so much science and fast-moving technology there is this calm, non-reactive personality that so brightly radiates from the baffling Dmitry Buterin. It is a marvelous thing to witness, even if remotely. The blockchain generation would be wise to model after that man’s behavior. Considering the beautiful family Dmitry and his wife made, and taking in all that Mr. Buterin has accomplished, it is safe to say he just might have a few answers worth paying attention to.