Cryptocurrency and blockchain technology has been in the recent past the hot topic in digital technologies, perhaps for its capacity to decentralize services for a variety of market.

One statement you will find in crypto-city is how blockchain is good and cryptos are bad. How true this is, is still unknown. In that connection, many people are waiting for governments to start using blockchain and invest in it.

We take a look at the governments that are using blockchain technology and exactly where and how, be it in the tax department, motor registry, land and titles, business registration, births deaths and marriages. 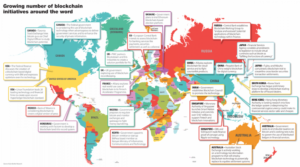 Switzerland – the province of Zug

On November 15th, 2017, the government of this province, through the registry department, launched the issuance of digital IDs based on ETH.

The small province of Zug in Switzerland is a masterpiece. Throughout the years, the province has had successes in terms of attracting investors with their low tax rates. Some of the investments in the lakeside town include prominent startups like Bancor, iProtus, Melonport, and Shapeshift.

The involvements in the blockchain world have earned the country the ‘cryptovalley’ status.

On April 19th the National Energy Commision launched the use of blockchain in energy. The government uses the Ethereum blockchain to track data and finances in a bid to ensure that there is accountability in the sector.

The new dispensation ensures accountability, traceability, and security. Importantly, it will improve public confidence in the Country’s Ministry of Energy. Through their energy minister, the Chilean Government states that blockchain has seen significant growth in the past decade. The results from the energy blockchain project, ‘Energy Abierta’ will be studied and the results shared to other sectors with the prospect of exploiting blockchain further. 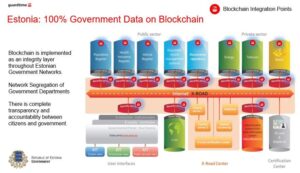 On 18th December 2017, Estonia established use of the blockchain system in one of the most interesting facets. Here is why:

A little history of the Baltic nation: back in 2004 the country coined a program called ‘E-Resident’. The digital program saw citizens of countries across the globe register businesses in Estonia by becoming digital citizens. Against this backdrop came the blockchain revolution, advocating the decentralization of services.

Coupling the E-resident program in Estonia and blockchain is nothing short of synergistic. Currently, the E-Estonia program is Ethereum based.

Though unofficial as of now, plans are underway to launch Estonia’s own ICO. The coin, ESTcoin, is to make the E-resident programme even more exciting and easy to adopt. The E-resident Ecosystem is just about to get better.

On August 3rd, 2016, through the UK Government’s ‘Innovate UK’, Blockchain-as-a-service (BaaS) was launched for purchase. As it stands, the blockchain is used for paying welfare checks and disbursing student loans.

However, the application of the BaaS is not limited to these two services. Any government agency in the UK is allowed to purchase it, then further services can be built and deployed to the general public.

The involvement of the Department for Work and Pensions is the most notable. Started in 2016, the department allowed pensioners to claim payments through a mobile app that is blockchain supported. With consent of claimants, the records are then stored in the Distributed Ledger.

A young democracy threatened by Russia and a record history of corruption, Georgia converted its land registry to blockchain on December 3rd, 2017.

The blockchain land register cuts costs by over 90% and the time to handle land-related issues is considerably shortened. The register has seen over 300,000 entries on the register. Corruption has been dealt with.

The Government of Queensland, Australia recently threw its weight behind crypto payments, a move which many government operatives say will boost tourism for the third populous, second largest state in Australia.

Tourism is a key economy mover for the state of Queensland. In the official government website, the government announced just this month grants for investors in this space. The grant totaling to AUD$8.3 million has been given to 70 domestic companies for this purpose.

TravelByBit, according to the government announcement, will lead the way, allowing easy payments for services and goods through crypto. The token uses a point of sale concept.

“Tourism is one of Queensland’s most important industries. TravelbyBit has devised a clever way to make it easier for visitors to our state to pay for their purchases with a growing number of local businesses accepting cryptocurrency payments.”

From the grant, TravelByBit receives AUD $100,000 for capacity improvement and expansion within the state.

As of October 13th, 2017, Interbank payments are made in Singapore using the blockchain concept, through a partnership between the Monetary Authority of Singapore (MAS) and a consortium of financial institutions.

Project Ubin takes the lead in a greater strategy to adopt blockchain in Singapore’s financial sector. The government plans to tokenize the state’s currency on the Ethereum network.

The authority also announced an allocation of over $225 million dollars to blockchain research and development. Singapore’s government and financial services are bracing for a ‘Great Blockchain Revolution’.

At the dawn of 2018, Venezuela declared Petro coin as their primary currency. This was in an effort to phase out the Bolivar which was going through record-setting inflations.

Petro coin is oil-based, with each coin backed with the oil reserves in the country. The coin runs on the NEM blockchain despite the whitepaper stating the coin is an ERC-20 Token on ETH.

The coin has been under fire for its grey areas and expectations to rescue a failed economy are in question. However, business analytics say there is potential in the Petro coin growth.

USA – for democracy and decision making

There are hurdles in implementation of blockchain in the USA, but some states are using the technology:

In May 2018, the Delaware House passed historic regulation that allows registration of businesses and trading on blockchain platforms. The bill won with a solitary vote and news of the bill was well-received by the cooperate world.

Matthew O’Toole, Chair of the corporate law section of the Delaware Bar Association says that he “expects the bill to be signed to law soon.” He further adds that:

“We look forward to helping Delaware corporations enjoy the benefits of this innovative new amalgamation of law and technology.”

The brains behind the bill is Caitlin Long of blockchain startup Symbiont and blockchain lawyer Marco Santori of Cooley LLP. The bill is a careful way to open up the large-scale stock market on blockchain.

In light of the bill, Delaware State awarded IBM the contract to design the distributed ledger based on the hyperledger blockchain framework.

In October, the state will launch a proof of stake concept which will ensure corporates enlisted in the state enjoy smart contracts to track stocks and collaterals in real time. This will help businesses meet state and federal regulations with ease.

After a successful pilot in two states, West Virginia will use the blockchain-based mobile App in all the 55 counties during the midterm election.

This decision was reached after the pilot was hugely successful and means military members from West Virginia will be able to cast their votes and have a say in the democracy and make decisions.

Countries exploring the use of blockchain

Through the Swedish Cadastre Office, the Swedish land department is exploring the possibility of converting the land register to blockchain, saying the time has come to change the registry to blockchain as the paper to digital system was done in the 70’s.

Speaking on behalf of the office, Mats Snäll says:

“In the 1970s, Sweden brought the land register from paper into the computer. So suddenly we did not trust the paper anymore. The Swedes have great faith in their state. But times change and so do people. The younger generations have grown up with cyber-security, transparency, and digitization. As a state, we must ensure that citizens still trust us tomorrow. Because otherwise they will trust companies like Google and use a future land register app that they are surely working on already.”

The Brazilian government seeks to move petitions that require voting and possibly the popular vote to Ethereum, a move aimed at improving accountability. If passed by congress and signed to law, the bill will deal with the country’s inefficient system.

The government of Dubai has a very ambitious goal when it comes to cryptocurrency and blockchain: to be the capital for blockchain technologies.

To that end, the government plans, through the Global Blockchain Council to roll out blockchain-supported initiatives this year, such as:

To date, the government of Dubai has partnered with IBM in the trade and logistics field as a start.

Canada is seeking to utilize the ETH blockchain for research grants. The use of Ethereum will see more transparency in the sector as a contingent against corruption.

According to Canada’s National Research Council:

“Blockchains provide the ultimate in transparency and trust, making this technology a brave new world for organizations that strive to conduct transparent business.”

On 6th May 2018, Indonesia expressed interest in exploring blockchain for data management for deployment in sectors from the country’s food output to election result verification. This move is in pursuit of accountability and data tracking ease.

Under their Director of Financial Innovation for the country’s Financial Services Authority, Mr Hadi Fithri, there is a team dedicated to developing the right blockchain platform to be used.

On 11th April 2018, 22 European countries came together to form a new group called the European Blockchain Partnership, an alliance made up of countries including Netherlands, Germany, France, UK, Norway and Spain.

In a statement, European Commissioner for Digital Economy and Society, Mariya Gabriel, said:

“Blockchain is a great opportunity for Europe and member states to rethink their information systems, to promote user trust and the protection of personal data, to help create new business opportunities and to establish new areas of leadership, benefiting citizens, public services and companies.”

A member of the Ukraine Electoral team in August 2018 took to Facebook to reveal their blockchain involvement. According to the post, the country is in the trial stages and taking into account all the logistics that will be needed to pilot a voting system on the NEM blockchain. 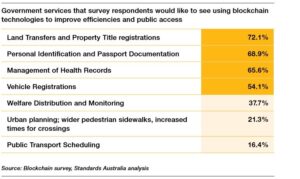 Blockchain presents the perfect platform for governments and countries to invest in the digitalization of their country’s processes and platforms. It will be interesting to see what this list looks like in 2019 and beyond.