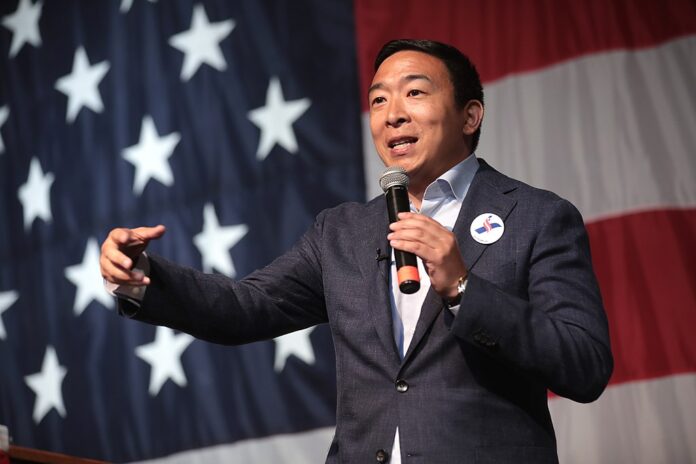 Andrew Yang is on the election trail in Iowa. The 2020 presidential hopeful spoke with Bloomberg in Des Moines on Wednesday.

Topics that took center-stage included universal basic income, the coronavirus, and, of course, many of his follower’s favorite affair: cryptocurrency.

However, over the course of the brief interview, Yang appeared to contradict himself when asked how he would regulate crypto:

“Well what I would say is we need to a have a uniform set of rules and regulations around cryptocurrency use nationwide because for now we’re stuck with this hodge podge of state by state treatments and its bad for everybody.”

After interviewer Joe Weisenthal pressed him on whether people should be allowed to move their money out of the banking system and into crypto, Yang replied:

“I don’t think that you could impede it with regulation if you tried.”

Caught Between the Yang Gang and a Hard Place

Yang’s rise to prominence in the race for the presidency is mostly down to his younger voter appeal. He has a strong presence on social media, and internet-based talk shows like Joe Rogan.

That has led his more ardent followers to dub themselves the “Yang Gang”. The trouble with this appeal, though, is that it places him in an awkward position.

On the one hand, he is backing his constituent’s fervent belief in a non-regulated crypto economy. And on the other, he’s looking to appease the calls for more regulation from government.

Yang previously said that regulating crypto is the only way to save the industry. So which one is it then Mr. Yang?

The Only Real Way to Regulate Crypto

Currently, the only real way to regulate crypto is at the point of exchange between the fiat and crypto ecosystems. Some Reddit users decry the obligation to hand over their social security numbers for the sake of the IRS.

More accurately, though, they understand the difficult position that Yang finds himself in:

“You could tell he is very pro-crypto but understands the potential political fallout of that position.”

According to a recent Times poll, Yang does not feature that highly, at least not in Iowa. Yang is a fan-favorite, but his progressive views may ultimately have little impact on the future of crypto regulations in the U.S.