0x’s current price, at the time of this writing, is $0.3216 USD, up by approximately 8.94% from the day prior. The up day for 0x yesterday was a reversal from the day before it, which puts its price at 33.93% above its 20 day moving average. Over the past two weeks, price has been in an up trend. Traders looking for a range to trade within may wish to note that the Bollinger bands (a price indicator based on recent momentum and volatility) for 0x imply the currency may oscillate between $0.164623 and $0.315617, based on how price has behaved in the two weeks prior. Price’s current proximity to the top of the range may make selling an attractive opportunity to traders interested in trading the range. 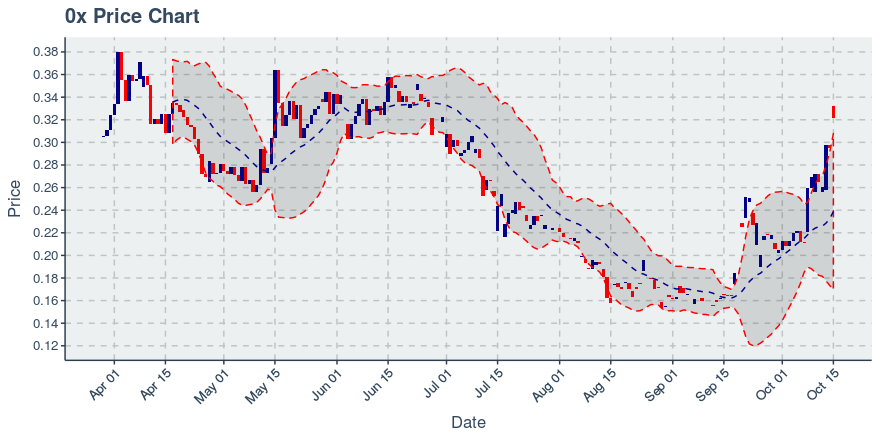 Over the past 24 hours, 5,677 transfers have been added to the blockchain recording transactions amongst holders of 0x. As for the number of holders, yesterday saw the number of wallets holding 0x rise by 276. If we observe percentage growth in holders and transfers, we find that 0x ranks 16 out of the 35 Ethereum tokens we are tracking.

In terms of wealth concentration, the richest 1,000 wallets own 89.47% of the coin’s total money supply. The percent of the currency that is owned by wallets that are both belonging to exchanges and in the top 1,000 richest wallets of the token comes out to 4.82% of the currency’s money supply. Exchange ownership grew by -0.19% over the past week, while the overall ownership percentage of the top 1,000 richest wallets grew by -0.06% over that time period. The underlying smart contract itself for 0x owns 0.01% of the total money supply; over the past week, this amount has not changed.

If you are interested in following 0x on social media, Twitter, where it has 151,081 following it, may be a good place to start. Here is the Twitter page for 0x.