At the time of this writing, Maker has a price of $645.58 USD, which puts it down by approximately 1.64% from yesterday. The down day for Maker yesterday was a reversal from the day before it, which puts its price at 11.17% above its 20 day moving average. Over the past two weeks, price has been in an up trend. In terms of an expected trading range, the Bollinger bands on Maker suggest price may bounce between $461.5791 and $699.8979 based on its momentum and volatility over the past 14 days. As we are closer to the top of that range, rangebound traders may wish to consider exploring selling opportunities.

Trade Maker (MKR) and over 500 other cryptos across ten different exchanges — all from one app. Try Quadency. 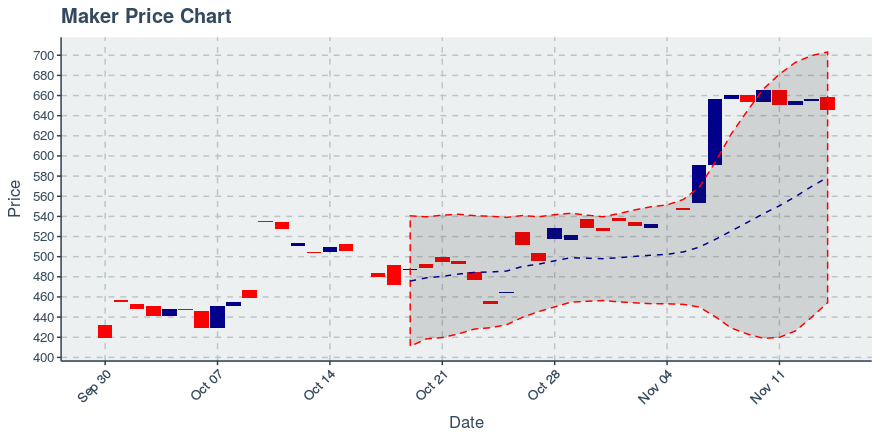 The market capitalization of Maker, or the amount of US dollars it would take to buy up all the circulating coins, is currently estimated to be $656 million.

Since yesterday, Maker saw anomalous behavior in holders added. It may be worth looking into the causes of this a bit more.

Yesterday saw 759 transfers amongst holders of Maker. As for the number of holders, yesterday saw the number of wallets holding Maker jump by 39. To provide context, we’d rank this token as 9 out of the 37 Ethereum tokens in our index based on percentage growth in engagement over the past 7 days.

Maker has been active recently on its GitHub repos, with its most recent code updates occurring today, November 14, 2019. Growth rates for open issues — a “”to-do list”” of sorts and watchers (“”subscribers”” following a code repository) for Maker are growing by 1.27 and 0.53, respectively, over the past 30 days.