Chainlink is up by approximately 7.55% from the previous day, with its price currently hovering around $3.061 USD. Chainlink is currently in an up, and it should be noted that this is now the the 3rd consecutive day that price has been up. Moreover, Chainlink is now 11.49% above its 20 day moving average. Chainlink’s expected trading range — as forecasted by the Bollinger bands indicator, which determines a range based on momentum and volatility over the past two weeks — is between $2.534271 and $2.956729. Given its boundaries, rangebound traders may find it compelling to entertain selling, as we are nearer to the top of the range.

Trade Chainlink (LINK) and over 500 other cryptos across ten different exchanges — all from one app. Try Quadency. 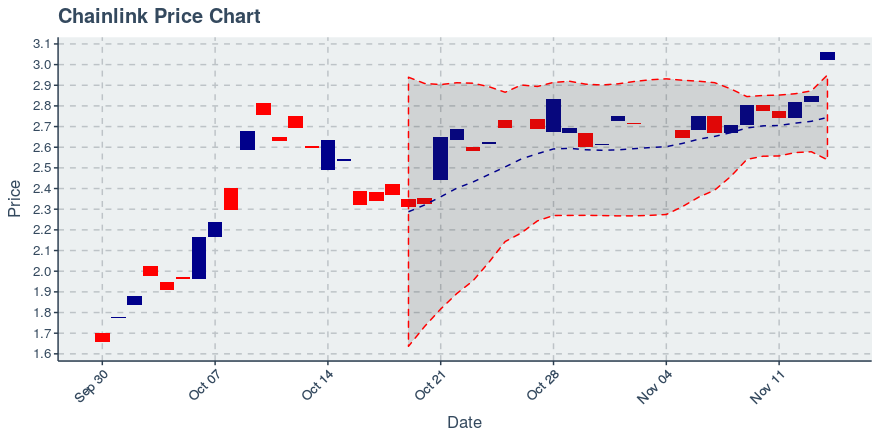 The market capitalization of Chainlink, or the amount of US dollars it would take to buy up all the circulating coins, is currently estimated to be $1,061 million.

Since yesterday, Chainlink saw anomalous behavior in price. It may be worth looking into the causes of this a bit more.

8,688 transactions amongst holders of Chainlink occurred yesterday. Regarding a tally of holders, Yesterday saw Chainlink’s wallet count jump by 195. If we observe percentage growth in holders and transfers, we find that Chainlink ranks 4 out of the 37 Ethereum tokens we are tracking.

In terms of wealth concentration, the richest 1,000 wallets own 91.87% of the coin’s total money supply. If we focus on exchanges, which may be an correlated with liquidity and greater confidence in the currency, the exchange wallets that are in the top 1,000 wallets own 0.99% of the currency’s total money supply. Exchange ownership grew by 0.03% over the past week, while the overall ownership percentage of the top 1,000 richest wallets grew by -0.01% over that time period.

In terms of how active the software development team working on Chainlink is, it may be worth observing that the last time any work pertaining to code was done on their GitHub code repository was on November 14, 2019 (today). To understand how code development is progressing, we can observe growth rates over the past 30 days in the number of open issues and the number of watchers: open issuers have been growing at about -0.1 per day, while the number of followers watching Chainlink’s repositories is growing by 1.27.