0x is down by approximately 2.45% from the previous day, with its price currently hovering around $0.2903 USD. 0x enters the day 1.48% below its 20 day moving average, and is experiencing its the 4th day in a row down. Traders looking for a range to trade within may wish to note that the Bollinger bands (a price indicator based on recent momentum and volatility) for 0x imply the currency may oscillate between $0.280455 and $0.308845, based on how price has behaved in the two weeks prior. Price’s current proximity to the bottom of the range may make buying an attractive opportunity to traders interested in trading the range. 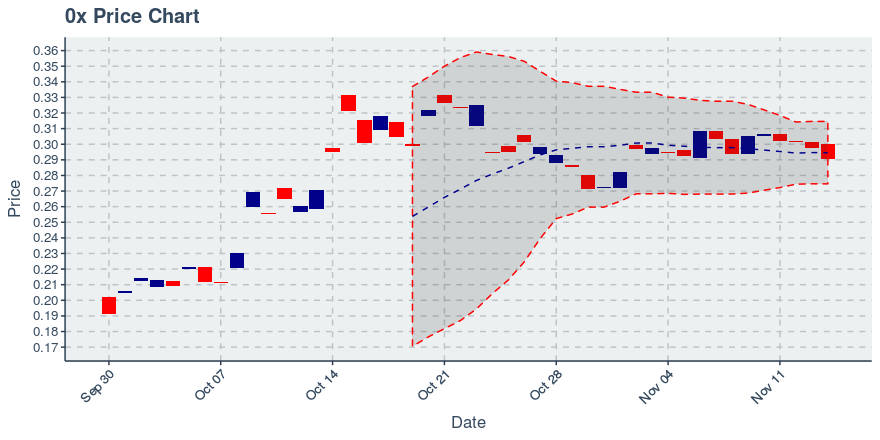 The market capitalization of 0x, or the amount of US dollars it would take to buy up all the circulating coins, is currently estimated to be $181 million.

Yesterday saw 805 transfers amongst holders of 0x. Regarding a tally of holders, Yesterday saw 0x’s wallet count jump by 105. If we observe percentage growth in holders and transfers, we find that 0x ranks 22 out of the 37 Ethereum tokens we are tracking.

0x has been active recently on its GitHub repos, with its most recent code updates occurring today, November 14, 2019. Growth rates for open issues — a “”to-do list”” of sorts and watchers (“”subscribers”” following a code repository) for 0x are growing by -0.17 and 1.63, respectively, over the past 30 days.