At the time of this writing, Maker has a price of $275.51 USD, which puts it down by approximately 2.73% from yesterday. The down day for Maker yesterday was a reversal from the day before it, which puts its price at 13.89% below its 20 day moving average. Over the past two weeks, price has been in a unclear trend. Another data point we may find worthy of observation is that price for Maker has increased 8 of the previous 14 days. As for the volume underlying yesterday’s move, note that the price change occurred on volume that was approximately 42.46% less than its 7 day average volume.

Traders looking for a range to trade within may wish to note that the Bollinger bands (a price indicator based on recent momentum and volatility) for Maker imply the currency may oscillate between $254.3925 and $385.5425, based on how price has behaved in the two weeks prior. Price’s current proximity to the bottom of the range may make buying an attractive opportunity to traders interested in trading the range. 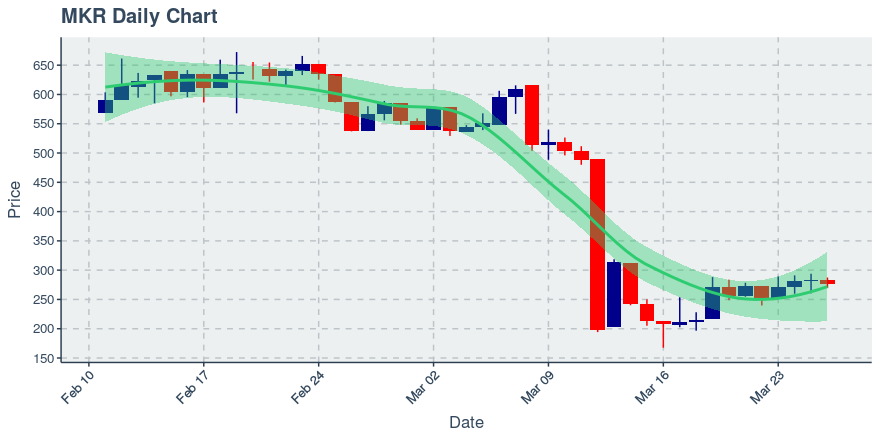 As for Maker’s market cap, it is currently at about $272M US dollars.

NA transactions amongst holders of Maker occurred yesterday. In terms of estimating the number of holders, over the past day the total number of wallets holding Maker has gone NA by approximately NA. In terms of recurring usage, we can note that 2,754 wallets have sent or received coins in the past month, while 172 have in the past day.