At the time of this writing, Basic Attention Token has a price of $0.1508 USD, which puts it up by approximately 1.41% from yesterday. Yesterday’s up day is a reversal of the day before it; in terms of trend, though, note that the current price is now 1.11% above its 20 day moving average, and is currently in an up trend over the past 14 days. From another vantage point, note that price has gone up 3 of the past 5 days. As for the volume underlying yesterday’s move, note that the price change occurred on volume that was approximately 369.96% greater than its 7 day average volume.

In terms of an expected trading range, the Bollinger bands on Basic Attention Token suggest price may bounce between $0.123771 and $0.174529 based on its momentum and volatility over the past 14 days. As we are closer to the top of that range, rangebound traders may wish to consider exploring selling opportunities. 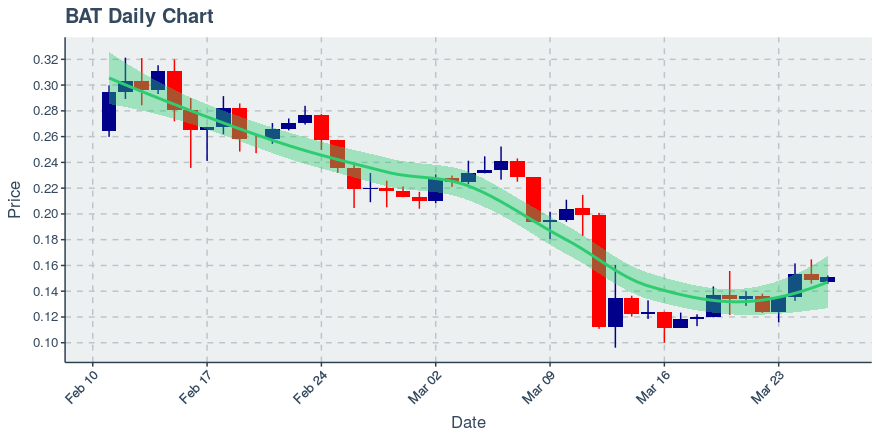 The market capitalization of Basic Attention Token, or the amount of US dollars it would take to buy up all the circulating coins, is currently estimated to be $218 million.

Over the past 24 hours, NA transfers have been added to the blockchain recording transactions amongst holders of Basic Attention Token. In terms of estimating the number of holders, over the past day the total number of wallets holding Basic Attention Token has gone NA by approximately NA. In terms of recurring usage, we can note that 20,255 wallets have sent or received coins in the past month, while 855 have in the past day.

March 24, 2020
© CryptoCoin.News. This is not financial or investment advise. Financial Disclaimer.
There is something wrong with the API