Chainlink’s current price, at the time of this writing, is $3.051 USD, down by approximately 20.21% from the day prior. This marked the the 3rd consecutive day Chainlink has been down; it is still in a unclear trend, and is currently 25.41% below its 20 day moving average; staying above this level may be critical to sustain short-term momentum. From another vantage point, note that price has gone up 4 of the past 10 days. And in terms of volume, yesterday’s price move ocurred on volume that was 3.93% greater than its 7 day average volume.

In terms of an expected trading range, the Bollinger bands on Chainlink suggest price may bounce between $3.206853 and $4.973647 based on its momentum and volatility over the past 14 days. Price’s current proximity to the bottom of the range may make buying an attractive opportunity to traders interested in trading the range. 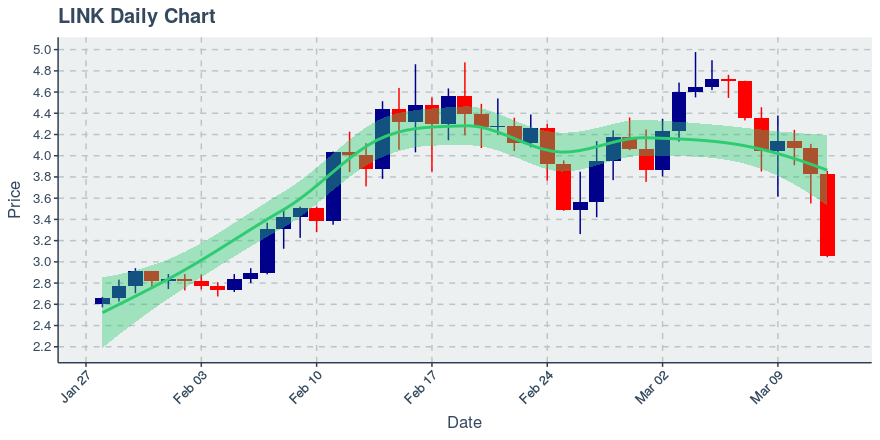 The currency’s market cap currently stands at $1,090 million US dollars.

Over the past 24 hours, NA transfers have been added to the blockchain recording transactions amongst holders of Chainlink. As for the number of holders, yesterday saw the number of wallets holding Chainlink NA by NA. To understand loyalty or repeat usage amongst holders of Chainlink, we can note that there were 1,515 wallets making a transaction yesterday, while 34,891 wallets have sent or received tokens in the past month; this imputes a daily active wallet to monthly active wallet ratio of about 0.04.

And in regards to wealth distribution, note that the top 1,000 Chainlink wallets hold over 261.27% of the token’s total money supply. Ownership exceeding 100% is due to the fact that our supply metric is focused just on available supply, and some large owners of Chainlink have ownership they cannot sell at this time — but may be able to in the future. If we focus on exchanges, which may be an correlated with liquidity and greater confidence in the currency, the exchange wallets that are in the top 1,000 wallets own 2.83% of the currency’s total money supply. Exchange ownership grew by 0.35% over the past week, while the overall ownership percentage of the top 1,000 richest wallets grew by -0.1% over that time period.

In the past day, Chainlink’s Twitter followers and Reddit subscribers went up by 134 and 17, respectively. If you are interested in following Chainlink on social media, Twitter, where it has 45,919 following it, may be a good place to start. Here is the Twitter page for Chainlink.