At the time of this writing, 0x has a price of $0.2172 USD, which puts it up by approximately 3.48% from yesterday. The past 24 hours mark a reversal in price from the day prior; it should be noted, though, that price is still in an up trend, and is currently 11.95% above its 20 day moving average. Staying above this level may be critical to sustain short-term momentum. 0x’s expected trading range — as forecasted by the Bollinger bands indicator, which determines a range based on momentum and volatility over the past two weeks — is between $0.165626 and $0.222404. Given its boundaries, rangebound traders may find it compelling to entertain shorting, as we are nearer to the top of the range. 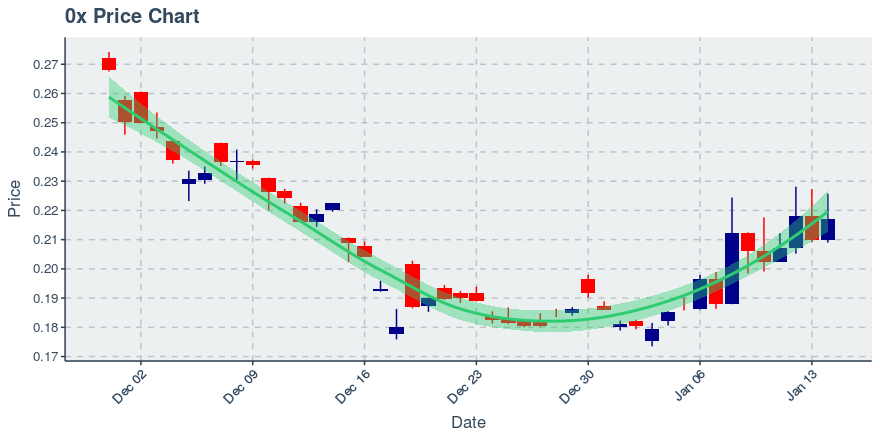 1,332 transactions amongst holders of 0x occurred yesterday. As for the number of holders, yesterday saw the number of wallets holding 0x increase by 98. If we observe percentage growth in holders and transfers, we find that 0x ranks 17 out of the 29 Ethereum tokens we are tracking.

Of the coin’s total money supply, the richest 1,0000 wallets currently own 89.15%. Drilling down to just exchanges, the top 1,000 wallets that are exchanges control 4.86% of the currency’s money supply. Exchange ownership grew by 0.4% over the past week, while the overall ownership percentage of the top 1,000 richest wallets grew by 0.26% over that time period. 0x’s smart contract owns approximately 0.01% of its own total money supply. This amount hasn’t changed over the past week.

In terms of how active the software development team working on 0x is, it may be worth observing that the last time any work pertaining to code was done on their GitHub code repository was on January 13, 2020, or approximately 1 days before. Growth rates for open issues — a “”to-do list”” of sorts and watchers (“”subscribers”” following a code repository) for 0x are growing by 0.37 and 0.87, respectively, over the past 30 days.