In the week prior, the price for Enjin Coin went down by -19.44%. It is below its 20 day moving average by 6.81%, so it’s slightly away. Enjin Coin’s bullish momentum, based on its distance from its 20 day moving average, is roughly middle-of-the-pack relative to the cryptos we’re tracking. Now when considering volatility, Enjin Coin is more prone to sizable price moves than 74% of coins in our index, so traders can expect a bit more volatility than usual. If volatility over the past three weeks is any indication of what’s to come, we can expect Enjin Coin to bounce between 0.1278779 and $0.1994021 US dollars per coin. 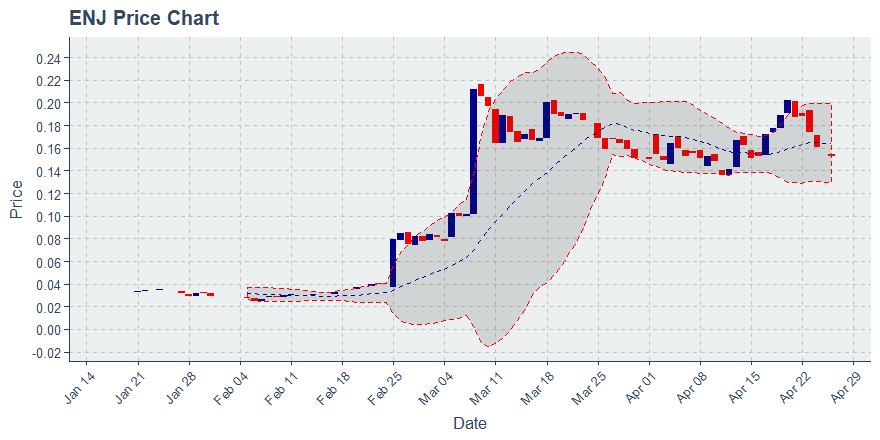 In the week prior, the daily volume for Enjin Coin has ranged between 20,722,136 and 158,776,399 currency units. Looking back over past 21 days, the trend in volume is not clear, though price is marching upwards. The past 7 days saw Enjin Coin’s trading turnover — meaning the percentage of its available supply that was traded — come in at 8.79%. Its turnover rate is more than approximately 79.38% of the cryptocurrencies in our index, so it’s above average and thus will have enough liquidity for many investors/traders.

The number of wallets holding Enjin Coin went from 26,608 to 27,121 in the past week, marking a change of 1.93%. And in regards to cumulative transactions logged on the blockchain, they went from 394,562 to 406,450, which amounts to a change of 3.01%. Enjin Coin’s combined growth rate — meaning the sum of its growth rate in holders and transactions — is 4.94% which puts it ahead of 85.29% of the coins in our index. This could indicate that the coin may be on track to getting and sustaining actual usage.

At the moment, Enjin Coin has 7 repositories open to the public on GitHub, with the oldest one now being 1.67 years young. The last recorded update to its public repositories was within the past day, which is pretty good, as it suggests the coin is still under active and rapid technical development. Enjin Coin’s repos that are visible to the public collectively have 115 watchers — that’s more than only 21 % of the 100 similar coins in our index. The coin has 0 issues reported across its public repositories. Its number of watchers, when viewed against its open issues count, doesn’t seem like something to worry about. To put the situation in context, Enjin Coin has a better issue/watcher ratio on its GitHub than 94% of similar coins we’re tracking.

The top 2 themes being discussed about Enjin Coin in the past week are listed below. If available, we added an excerpt from the article to help give a taste of what it is about.