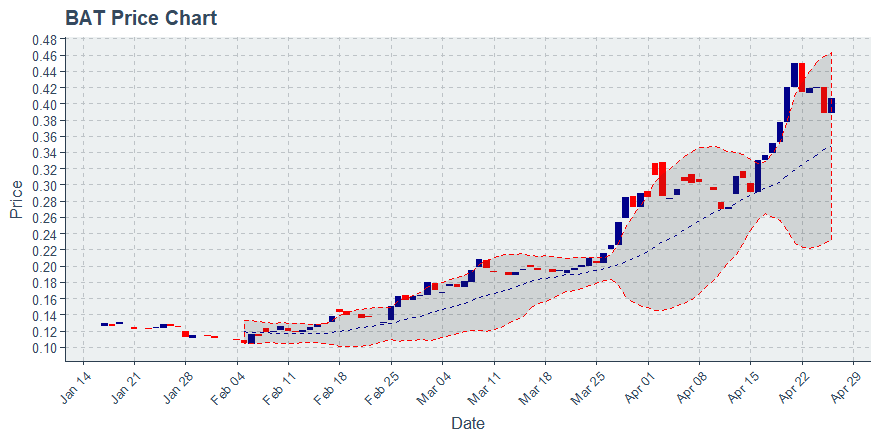 In the week prior, the daily volume for Basic Attention Token has ranged between 138,270.9 and 3,191,382 currency units. Over the past three weeks, the trend in volume is not clear, though price is marching upwards. Basic Attention Token experienced a turnover rate of about 0.09% over the past week, which means that is the percent of its available money supply that is traded daily. Its trading turnover percentage is higher than about 9.28% of the coins we’re tracking, so it’s well below average; this coin may be hard to get into and out of, and thus is suitable only for those interested in holding and exiting slowly and patiently.

Over the past week, Basic Attention Token saw its holders go from 107,616 to 110,361, an increase of 2.55%. In terms of blockchain-recorded transactions made by these wallets since their inception, that number changed from 820,636 to 844,977, which translates to growth of 2.97% for the week. The combined engagement growth rate (growth rate in holders plus growth rate in transfers) of Basic Attention Token is thus at 5.52% which, relatively speaking, is ahead of 91.18% of the cryptocurrencies we’re tracking. This could indicate that the coin may be on track to getting and sustaining actual usage.

At the moment, Basic Attention Token has 30 repositories open to the public on GitHub, with the oldest one now being 2.54 years young. The last recorded update to its public repositories was within the past week which is not bad, as the coin is still being updated routinely. Basic Attention Token’s public repositories collectively have a total of 221 watchers, which is below average relative to its peers; that’s more than only 30 % of the 100 similar coins in our index. The coin has 106 outstanding issues in the backlog awaiting to be addressed by the core development team. Its number of watchers, when viewed against its open issues count, is quite poor, and may potentially indicate some concern that the software is at risk of not being updated fast enough. Our hypothesis that the open issue/watcher ratio may be of some value in assessing the healthiness of a coin’s software development process, and for Basic Attention Token, this ratio was better than a mere 7 % of the similar coins we track in our index.

We found 2 links over the past week about Basic Attention Token that we thought were especially worth sharing. If possible we included a brief excerpt from the article — be sure to click through for the entire piece.

How BAT is Being Used Today – Anant Singh