0x is down by approximately 2.93% from the previous day, with its price currently hovering around $0.1792 USD. 0x enters the day 13.86% below its 20 day moving average, and is experiencing its the 3rd straight day down. 0x’s expected trading range — as forecasted by the Bollinger bands indicator, which determines a range based on momentum and volatility over the past two weeks — is between $0.181045 and $0.235025. Price’s current proximity to the bottom of the range may make buying an attractive opportunity to traders interested in trading the range. 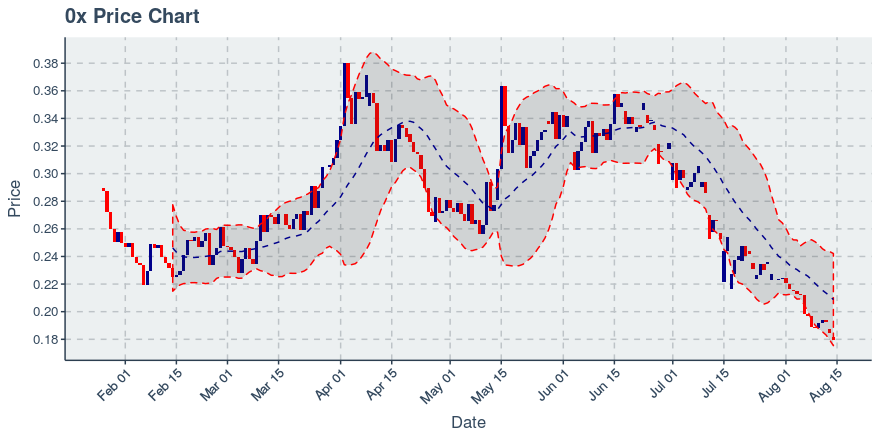 The market capitalization of 0x, or the amount of US dollars it would take to buy up all the circulating coins, is currently estimated to be $109 million.

Over the past 24 hours, 2,308 transfers have been added to the blockchain recording transactions amongst holders of 0x. Regarding a tally of holders, Yesterday saw 0x’s wallet count jump by 74. To provide context, we’d rank this token as 20 out of the 35 Ethereum tokens in our index based on percentage growth in engagement over the past 7 days.

Of the coin’s total money supply, the richest 1,0000 wallets currently own 90%. Drilling down to just exchanges, the top 1,000 wallets that are exchanges control 5.49% of the currency’s money supply. Exchange ownership grew by -0.54% over the past week, while the overall ownership percentage of the top 1,000 richest wallets grew by 0.13% over that time period. As for the 0x’s smart contract itself, that owns 0.01% of the total money supply, an amount unchanged from the week prior.

0x has been active recently on its GitHub repos, with its most recent code updates occurring today, August 14, 2019. Growth rates for open issues — a “”to-do list”” of sorts and watchers (“”subscribers”” following a code repository) for 0x are growing by 0.93 and 1.73, respectively, over the past 30 days.

In the past day, 0x’s Facebook likes went up by 5, respectively. If you are interested in following 0x on social media, Twitter, where it has 151,359 following it, may be a good place to start. Use this link to follow 0x on Twitter.