At the time of this writing, Maker has a price of $288.38 USD, which puts it down by approximately 0.94% from yesterday. Maker enters the day 6.39% above its 20 day moving average, but is experiencing its the 2nd consecutive day down. From another vantage point, note that price has gone up 8 of the past 14 days. Another data point we may find worthy of observation is that price for Maker has increased 8 of the previous 14 days.

As for Maker’s expected trading range — as forecasted by the Bollinger bands indicator, which determines a range based on momentum and volatility over the past two weeks — is between $222.249 and $319.879. Given its boundaries, rangebound traders may find it compelling to entertain selling, as we are nearer to the top of the range. 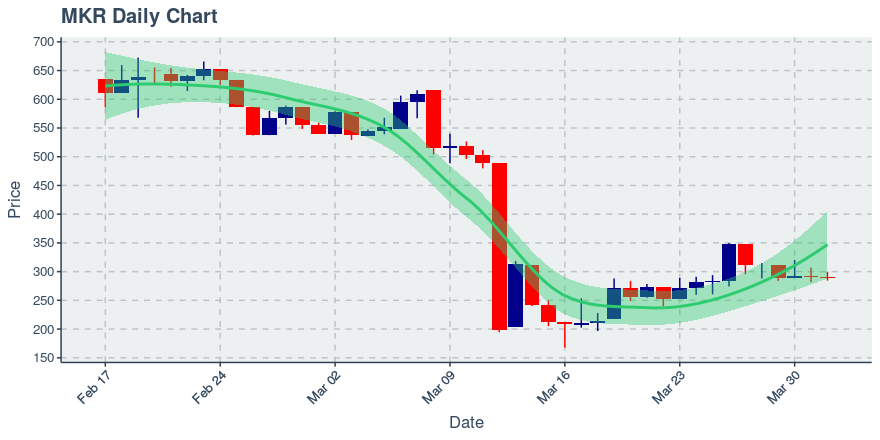 The market capitalization of Maker, or the amount of US dollars it would take to buy up all the circulating coins, is currently estimated to be $292 million.

288 transactions amongst holders of Maker occurred yesterday. As for the number of holders, yesterday saw the number of wallets holding Maker jump by 35. To understand loyalty or repeat usage amongst holders of Maker, we can note that there were 134 wallets making a transaction yesterday, while 2,887 wallets have sent or received tokens in the past month; this imputes a daily active wallet to monthly active wallet ratio of about 0.05.