Over the past week, 0x saw its price go down by -0.81%. It is below its 20 day moving average by 3.39%, so it’s slightly away. 0x’s bullish momentum, based on its distance from its 20 day moving average, is roughly middle-of-the-pack relative to the cryptos we’re tracking. Regarding volatility, 0x is more volatile than roughly 28% of coins in our index, so it’s notably less volatile than the other cryptocurrencies we’re monitoring. Looking ahead, if the upcoming week mirrors the volatility of three past three weeks, the price range for 0x in US dollars is expected to be between $0.2772705 and $0.3545495. 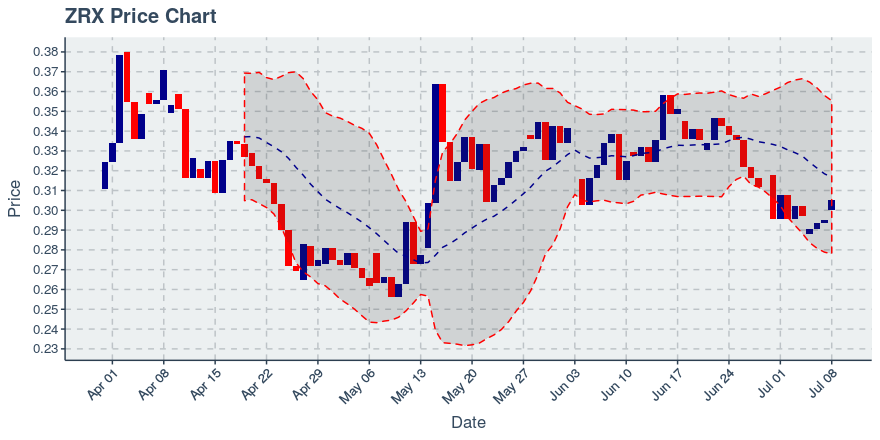 In the span of the preceding 7 days, 0x’s daily volume, in terms of its own unit of currency, has fluctuated between 559,212.2 and 4,895,432. Looking back over past 21 days, the trend in volume does not have a clear direction, while the price trend is clearly down. The past 7 days saw 0x’s trading turnover — meaning the percentage of its available supply that was traded — come in at 0.42%. Its trading turnover percentage is higher than about 20.59% of the coins we’re tracking, so it’s below average, and so there may be some risk that traders/investors have difficulty in getting in and out of positions.

Over the past week, 0x saw its holders go from 99,285 to 100,493, an increase of 1.22%. In terms of blockchain-recorded transactions made by these wallets since their inception, that number changed from 893,450 to 903,668, which translates to growth of 1.14% for the week. 0x’s combined growth rate — meaning the sum of its growth rate in holders and transactions — is 2.36% which puts it ahead of 52.94% of the coins in our index. This growth rate suggests the coin’s weekly growth in engagement is fairly mediocre.

At the moment, 0x has 30 repositories open to the public on GitHub, with the oldest one now being 2.17 years young. Its last public update to any of its repositories was within the past day, which is pretty good, as it suggests the coin is still under active and rapid technical development. 0x’s repos that are visible to the public collectively have 1791 watchers — that’s more than 84 % of the top 100 coins we compare it to. The coin has 159 issues reported across its public repositories. Relative to the number of watchers it has, though, its open issues count is fairly mediocre. We consider the GitHub open issue/watcher ratio as a potential indicator of the healthiness of a coin’s software development process, and for 0x we see that its issue/watcher ratio looks healthier than 53% of similar coins in our index.

We found one link over the past week about 0x that we thought was especially worth sharing. Where available, we included a snippet of the article that we thought might be interesting.

This hackathon team created the smart contracts and back-end needed to tokenize the Linden dollar as an ERC-20 token and to tokenize Second Life’s in-game items as ERC-721 tokens….This integration is powerful in that it leverages contract-fillable liquidity, which describes the ability for smart contracts to programmatically swap tokens by filling orders on DEXs. Contract-fillable liquidity unlocks a variety of applications, giving devs and businesses the opportunity to build or combine smart contracts to create novel financial markets.