Over the past week, 0x saw its price go up by 10.05%. It is below its 20 day moving average by 6.65%, so it’s slightly away. 0x’s bullish momentum, if assessed by its distance from its 20 day moving average, is roughly middle-of-the-pack relative to the cryptos we’re tracking. Regarding volatility, 0x is more volatile than roughly 43% of coins in our index, so it’s volatilty is about what you’d expect for a cryptocurrency in our index. Based on volatility over the past three weeks, we can expect 0x to experience a price range in US dollars between 0.1988817 and $0.3193683. 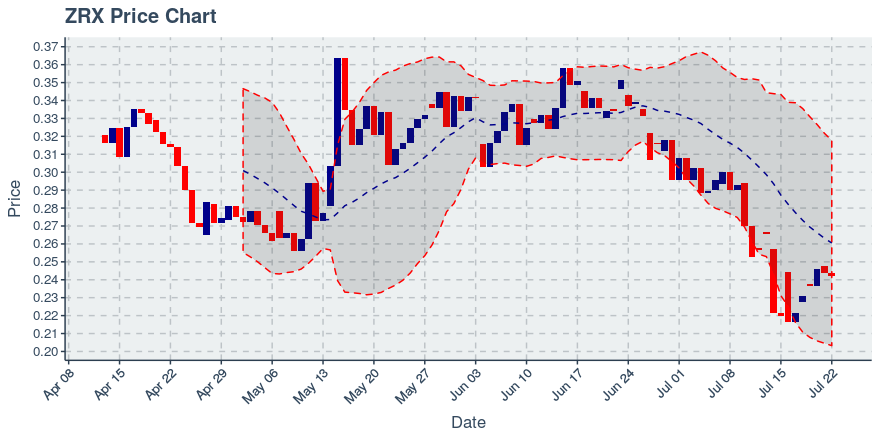 In the span of the preceding 7 days, 0x’s daily volume, in terms of its own unit of currency, has fluctuated between 562,166.7 and 11,943,386. Over the past three weeks, the trend in volume does not have a clear direction, while the price trend is clearly down. Over the past week, 0x saw its trading turnover — which we define as average daily trading volume divided by circulating supply — register at 0.87%. Its trading turnover percentage is higher than about 42% of the coins we’re tracking, so it’s middle-of-the-pack; investors/traders may thus wish to consider their liquidity requirements to make sure the coin matches their needs and their expected trading volume.

0x currently has 30 public repositories on GitHub, with the oldest one now 2.21 years young. The last recorded update to its public repositories was within the past day, which is pretty good, as it suggests the coin is still under active and rapid technical development. 0x’s public repositories collectively have a total of 1826 watchers, which is very impressive; that’s more than 83 % of the top 100 coins we compare it to. The coin has 160 outstanding issues in the backlog awaiting to be addressed by the core development team. Its number of watchers, when viewed against its open issues count, is fairly mediocre. We consider the GitHub open issue/watcher ratio as a potential indicator of the healthiness of a coin’s software development process, and for 0x we see that its issue/watcher ratio looks healthier than 54% of similar coins in our index.

We found one link over the past week about 0x that we thought was especially worth sharing. If possible we included a brief excerpt from the article — be sure to click through for the entire piece.

0x: Shut down of the Exchange v2.0 contract and migration to patched version, De