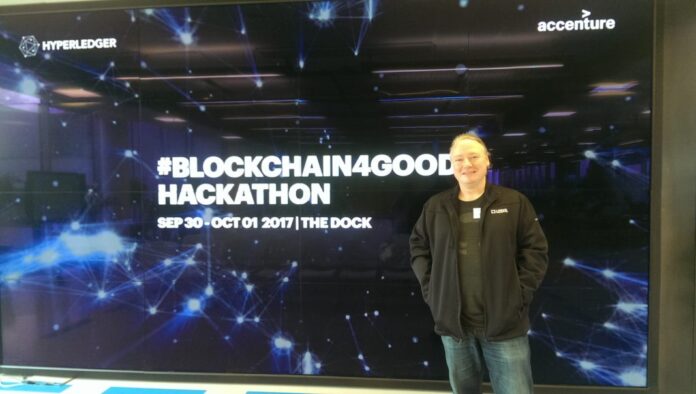 Great guest post by Fiona Reilly with Brian Behlendorf Executive Director of the Hyperledger Project. Fiona chatted to Brian at the Blockchain for Good Hackathon in Dublin last weekend.

The Hyperledger project is run out of the Linux Foundation and started in December 2015. The impetus behind the project came from an interest in looking at the potential to use the blockchain model of distributed ledgers and smart contract to other domains outside of currency. The project is a global collaboration of nearly 200 members supporting and participating in the technology. This group is made up of leaders from finance, banking, IoT, supply chain, manufacturing and technology.  The Hyperledger project aims to enable communities to work together on common code and it acts as an “umbrella” for software developer communities building open source blockchain and related technologies to create innovative modular open source components and platforms.

My own personal interest in the project began with the potential use of the blockchain to record Land titles in Emerging Markets, I joined the project in May 2016. Part of my role is to travel around the world working with potential end users eager to leverage the technology, I look at myself as the ‘Geek Diplomat’.

One of the stated goals for Hyperledger is to create enterprise grade frameworks in Blockchain Technology, could you elaborate

Hyperledger aims to bring together a number of independent blockchain projects by providing a modular framework that supports different components for different uses and in this way develop open protocols and standards between the developments. Currently Hyperledger are incubating eight business blockchain and distributed ledger technologies, each of the projects have their own development community with their own consensus and storage models, services for identity, access control, and contracts but they have all been developed under the one umbrella.  The idea is that there is a common software infastructure so as that the skillsets and apps built can be portable. These different distributed databases are designed for particular marketplaces or for specific applications for example the Fabric project is based on a consensuses mechanism, Sawtooth is a consensus mechanism based on Proof of Elasped time, Burrow connects to the Etherum technology stack and Indy which builds distributed ledger specific to identity networks with distributed ID wallets.

What interesting blockchain use cases are gaining traction

Blockchain has the potential to be a really important piece of technology, it can provide answers to communities which did not previously have answers. Decentralisation, systems of record and immediate settlement are key features of the model which you cannot get using a centralised database approach. There are some very interesting use cases coming through on Healthcare and in the presentations this morning we saw use cases for Supply Chain Management and Identity developed through blockchain technology. Another very interesting area is in relation to Ethical Food Chain tracking, this type of use case supports our commitments as a global community under the Sustainable Development Goals.

What are the next steps for the Hyperledger project

The technology domain is still very young, we are calling on continued active developer engagement on our 8 core projects. We will see a new release of Fabric. We are doing some work with Decentralised Identity Foundation. Watch this space.

Wrapping up day 1 of the Blockchain for Good Hackathon in Dublin with @brianbehlendorf. Great work everyone – see you tomorrow! pic.twitter.com/4HfbzbkDAD

Fiona Reilly (FCA), is a Finance & Accounting professional with a solid reputation for developing and delivering business strategy in changing business environments. She is actively engaged in the FinTech Ecosystem in Ireland. Fiona is an Arthur Andersen trained Chartered Accountant holding a BSc in Management from Trinity, a Diploma in Strategic Finance and is currently studying FinTech at the National College of Ireland.