Remember Coinhive? That dirty little snippet of code that several major online services including Showtime hid on their websites to secretly mine Monero with users’ computers?

Non-profit initiative The New Inquiry has launched a similar program called Bail Bloc that people can download to do the same thing. That is, to use their computer’s idle processing power to crowd mine Monero, proceeds from which will go towards a good cause: “to post bail for low-income people detained in New York effective immediately”.

It is a partnership initiative with the Bronx Freedom Fund, a charity that works specifically with communities in the residentially segregated neighbourhood of South Bronx in New York, notorious for its poverty and state of urban decay. As jail time often disrupts normal employment for many residents accused of misdemeanours, the fund’s goal is to keep people in their communities and in their jobs while they await trial, by posting their bail money.

According to the Bail Bloc website, every fraction of Monero mined as a result from the collective efforts of users will be converted (sold) to US dollars, of which 100% goes into a bail fund. These funds are “revolving”, meaning that they are returned to their source when people appear for all their court appointments.

As funds are only used for clients of the Bronx Freedom Fund, this results in a high revolving fund rate of 96% and a potential accumulation of the fund. 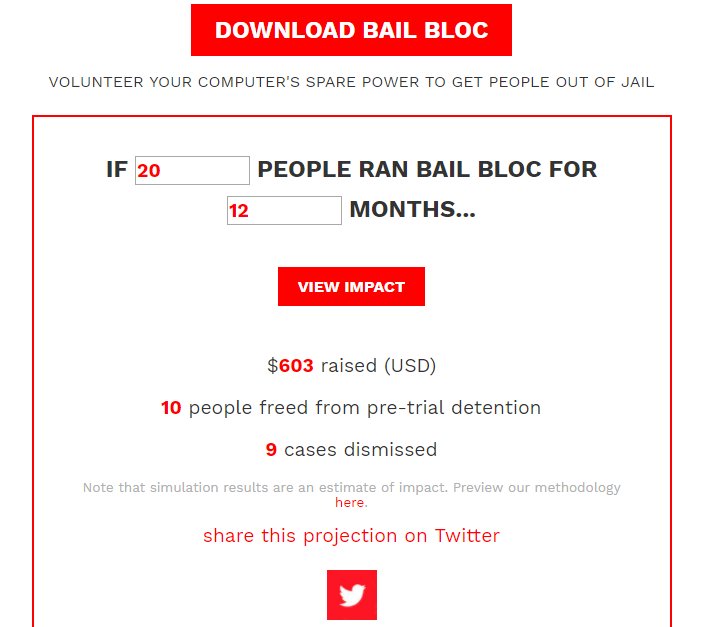 As with similar scripts, taking into account the difficulty of mining Monero and the comparatively low computational power of the average home computer, Bail Bloc does not expect individuals to mine very much. However, based on their calculations (which can be tested on the website), it would take about 15 people 5 months to raise enough money to free one person from pre-trial detention.

If successful, the venture could be one of many turning points for Monero’s reputation, often associated with the less savoury elements of cryptocurrency use on dark markets.

The original concept widely introduced by Coinhive is turning into a viable source of alternative revenue for services unable or unwilling to turn to advertising, with crypto faucet sites especially finding significant support from users volunteering to run the script from their web browsers.

Its covert use by popular sites like Showtime and Pirate Bay, however, have meant that most major antivirus and anti-malware software now automatically block scripts running similar processes. As a result, any future initiatives will likely require people to download and execute a program, much like Bail Bloc.