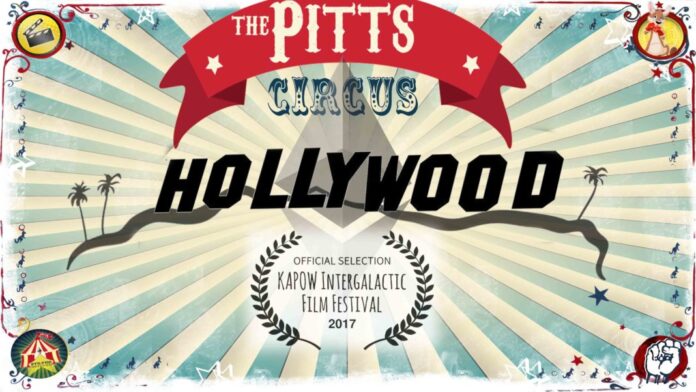 The world’s first Ethereum-funded Movie “The Pitts Circus” celebrates its world premiere in Hollywood at the Kapow Intergalactic Film Festival from 9th November to 15th November. The screening takes place in the legendary Laemmle’s, North Hollywood. The Laemmle Company, a scion of cinema’s golden age, was established in 1938 by Nephews of the legendary Universal Pictures founder Carl Laemmle.

Leveraging blockchain to finance a movie and engage with those stakeholders involved in the movie (everyone from the production team to the movie-goers) is a new and truly innovative use of blockchain technology and something that could see wider usage, not just in the movie industry but in many other creative industries.

The plot centers around an Australian Circus Family who get themselves into trouble over a hardware wallet that belongs to a Swiss Aristocratic family. The movie follows the family on their journey and gives viewers an authentic insight into family life on the road with the circus but in a modern context where blockchain has an increasing important impact on the way we go about our day-to-day lives. The film is shot using state-of-the-art cinematic techniques and is a mixture of light-hearted family-oriented entertainment and comedy, with Ethereum and blockchain a powerful thread that weaves its way throughout the plot. Currently under embargo, movie-goers will have to wait for the movie’s official release in Hollywood this November to find out what becomes of the family and their troubles with an Ethereum hardware wallet.

The Pitts Circus is an international production with global focal points in Switzerland, Australia, the UK and Ireland. The Pitts Circus was shot in Australia and Switzerland early in 2017 and the post-production took place in one of the world’s leading-edge hotspots for movie industry – Belfast, Northern Ireland. Belfast is an increasingly popular location for the film industry due to the abundance of talent and enthusiasm on the post-conflict island, the openness and support of local and national government towards the international movie industry, the country’s beautiful scenery, the well established global movie industry contacts not to mention the low cost of doing business and easy access to global English-speaking markets. Pitts Circus follows in the wake of big productions like Game of Thrones which had a huge impact and influence on the movie industry in Northern Ireland.

The Pitts Circus was funded earlier this year through the Ethereum Movie Venture token sale. The token is trading live on etherdelta.com, decentrex.com and cryptoderivatives.market. Ethereum Movie Venture plans to do many more productions in future with an initial target of one production per year. At the moment a vote is taking place to determine which project will go ahead in 2018. All Ethereum Movie Venture token holders have a voting token that they can use to choose the project that they think should funding in 2018. The Ethereum Movie Venture team is currently looking at ways of making the ecosystem even bigger by airdropping a special token that can be accepted by partners as a payment means (for example, getting access to a movie theatre). The Ethereum Movie Venture has pioneered a new way of raising funds to create a movie and interacting with movie-goers in ways that would be impossible without blockchain and smart contract technology. The movie industry is looking very closely at The Pitts Circus, what they have done, how they raised their funds and how they engage and interact with all movie stakeholders in a completely new and innovative way.

Toni Caradonna, Producer of the The Pitts Circus said: “Originally we were a bunch of Circusfreaks and Cryptopunks that always wanted to tell the amazing Story of this unique Circus Family. We were absolutely blown away with the success of our independent movie that is so not Hollywood.” He went on to say: “With the advent of Ethereum we felt this is a gamechanger. We believe that blockchain technology will have the same impact on society as the Internet did. For the first time in history, humans are delegating trust away from institutions and people to machines and processes. With every disruptive innovation technology that can be both good and bad. In our case it empowered us and our community to create a piece of art that does not follow mainstream. We strongly believe in diversity in society and in the arts too. The fact that Ethereum has made this possible and gave art the voice we think it merits is a good thing. This movie about this amazing family is the proof that blockchains like Ethereum actually do have a real world impact that is way above the boring trading business. The fact that I have been invited to talk to ambassadors, consuls and even the Assistant Director of the Swiss National Bank shows that this could be big!”

The Pitts Circus is directed by Ken Fanning, edited by Stuart Sloan and produced by Toni Caradonna. Post-production was done in Belfast, Northern Ireland. Audio post-production is from Soundstudio, Berlin. The world premiere takes place in Hollywood on November 14th.

Interviews with the director: