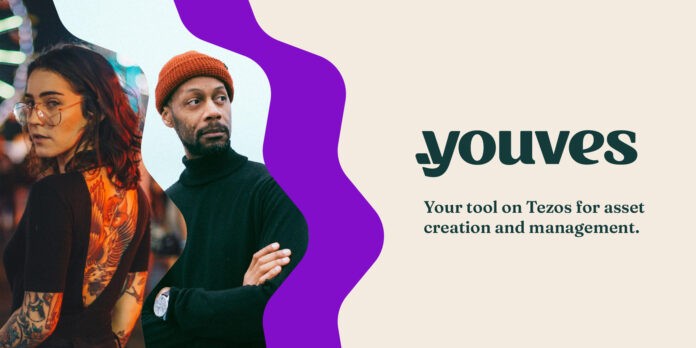 Lukas Zuegg sat down again for a chat with Werner Brönnimann, co-founder of ubinetiq, the creators of the DeFi platform youves on the Tezos blockchain. The platform keeps going from strength to strength and has recently introduced several new innovative features. Here are the key take-aways from their chat:

Youves is a decentralized, non custodial and self-governed finance platform that enables users to deposit XTZ as collateral and take out a loan by minting assets. The current stable coin for the platform is uUSD. The platform also supports users depositing uUSD in their savings accounts and they get to earn interest in return. Upon uUSD minting, users begin to earn  YOU tokens, which are the platform’s governance token.

YOU token holders are allowed to stake their tokens and in return earn a portion of Youves platform’s revenue in uUSD.  They can also use the uUSD as collateral in minting UDEFI.

The latest addition to Youves platform is the integration of the flat-curve swap feature. The feature uses Altman’s flat curve for one-to-one token relationships. The concept behind this feature, according to Sam Altman, is that when you are standing on the exponential curve of technology, it looks flat behind you and vertical in front of you. but it’s just a curve.

Another milestone for the Youves platform has been the introduction of usage for the liquidity baking LP tokens (the tzBTC LB tokens) as collateral for its uUSD assets. These are essentially liquidity pool tokens that you receive for as long as you provide liquidity to the XTZ/tzBTC pool in Liquidity Baking (LB). Although the idea was not original, the liquidity baking feature has delivered impressive results for the platform, bringing forth a paradigm shift to the DeFi space and clearly value adding for the platform.

Beyond that, the Youves platform has brought several proposals to the table for progress considerations. Among these include:

This feature is yet to attract significant traction for the platform, an outcome partially attributed to the developer’s decision to only allow uUSD as collateral. At the time, it seemed like a better option to give the uUSD more use cases, which although is still a valid reason, the platform has realized at the moment, not many people are happy to mint and effectively short DeFi tokens when holding long dollars as collateral.

With the upcoming proposals, however, the Youves platform hopes that the uDeFi tracker will receive better acceptance in the community under the YIP #5, where Youves will allow additional collaterals for all the existing tokens. For instance, the platform hopes that users will be more open to using Tez token as a collateral for minting the short uDeFi.

Proposal 2: Gold Tracker token (uXAU) and the unification of YOU staking pools.

This proposal has been pushed back several times for priority reasons, and included the unification of YOU Staking Pools. Under this proposal, the newly introduced gold tracker token named “uXAU” would be implemented similar to uDEFI. It was also proposed that uXAU should be tested on Granadanet prior to launching on mainnet.

The Gold tracker token is on the test net, although the platform remains skeptic about launching following their experience with the uUSD and uDEFI. The target price tracking of the uUSD became significantly better once it was listed on a DEX in pair with a wrapped USDC. One possible reason is that the Tezos ecosystem  has not yet to reached a stage of sufficient market liquidity and efficiency.  If the current price of a stable/tracker vs. non-stable token pair, say uUSD vs. tez, is such that it implies a price of the stable token which is off target, then ideally there should be a correcting arbitrage trade happening.  This is not an issue if the listed pair consists of stable/tracker tokens on both sides.

With more growth on the platform comes increased earnings for liquidity incentivization. However, such a growth would require a certain extent of liquidity, which should also be scalable creating a wholesomely growing ecosystem.

As regards incentivizing with the YOU token, once the volume of the token on the platform, there would be increased earnings as well as staking rewards for the YOU token, which will ultimately lead to the increase on prices of the YOU token. When this happens, liquidity provision would become more attractive.

Other ideas include the creation of a unified staking pool, where the earnings created from various tokens (uDeFi, uUSD, uXAUand uBTC) are channeled to a common pool instead of their various pools for platform earnings. In this regard, the platform would take these earnings and swap them against YOU tokens. their second amendment proposal.

Youves therefore looks to combine their liquidity provision with the long-term methodology implemented for the farms or something similar. This idea has already passed the voting stage but it is expected that the YOU token will grow in value once the selling pressure reduces.

The Youves community identified the tzBTC LB liquidity pool as an attractive token for collateral for vaults and established that tzBTC LB should be used in uUSD vaults. The suggestion pushes for the implementation of uUSD with tzBTC LB token collateral in the same way as the uDeFi with uUSD collateral.

This proposal introduces a new tracker token, uBTC. This would track the performance of Bitcoin. Its collateral shall be either tez or the tzBTC LB token. The uBTC is an algorithmic Stable Token pegged to value of uBTC. It is fungible by design and backed by Tez collateral. Conversion rights for the minter and the holder strengthen the peg. uBTC offers interest income in uBTC to its holders.

The proposal was accepted by the Youves community after they could vote using YOU tokens (the Youves governance token). Initially, uBTC can be minted after submitting XTZ as collateral. It follows that tzBTC LB tokens will also be accepted as collateral. The concept would be the same as the current uUSD and uDeFi minting process.

The proposal also featured a DEX whose function would be available on the Youves DeFi platform and towards the attainment of a close to 1:1 trade for BTC wrapped tokens and stable coins. The same goes for stablecoins like uUSD, kUSD, USDtz for example. In an ideal system, all same value tokens should be inter-tradable without losing value. But in traditional DEXes, supply and demand heavily influence the exchange rate between tokens.

The DEX fees would be 0.15%, half of which gets paid to liquidity providers and the other half is revenue for the platform.

Under this proposal, Youves platform endeavors to incorporate most of the tokens they interact with while keeping door open for bringing in new ones when it makes sense. There is no uUSD or wrapped USDC collateral for the uUSD because the developers think it does not make sense and while it could potentially bring volume for the platform, minting dollars with dollars would not be a simple task.

The proposal suggests enabling the below additional collateral types for the four existing tracker tokens:

Fairly after the acceptance of proposal 5, Youves is also planning another launch of the uEURO, which will be a decentralized stable token that will serve as collateral and would track the value of the Euro. This is the second part of amendment proposal 5 and has a simple working mechanism. The developers are awaiting proper liquidity before they can launch this feature.

The following tokens and coins collateral shall be eligible collateral:

This feature uses the checker methodology to serve in checking the performance and acceptance of assets. Tokens of the checker variety do not pay an interest rate, but the target value of the token will change over time to incorporate the value of the interest rate of the tracked asset. In the case of CHF, the 3-month (SARON) interest rate is roughly at -0.75%. Assuming stable interest rates, the expected value of one cCHF would be 0.9925 CHF after one year and roughly 0.985 after two years. If rates in CHF go positive again, the cCHF is expected to grow over time.

Checker is a generic piece of software for creating robocoins on the Tezos blockchain. It algorithmically controls the coin’s supply by creating incentives for creation and destruction, in order to maintain a smoothed drift of the value of the coin towards that of its external target measure. The collateral for the cCHF will be tez only. As with the tracker tokens uUSD, uDEFI and uBTC, the YOU token allocation on the Youves platform for cCHF is proportional to the fees earned by the platform.

With continued advancements in technology, Youves is definitely a good place to be and the strides made so far are quite notable. However, it remains for the market to really embrace Tezos. It is a great place for DeFi because most offerings of the platform will be based on decentralized finance and Youves has secured its place as a beacon for Tezos DeFi over the next few years.

In summary, there are lots of new developments on the youves platform, giving Tezos, which witnessed a cambrian explosion in the NFT space a much needed level-up in the De-Fi sector. More is yet to come so watch this space.

Some thoughts on liquidity

The liquidity in the Tezos DeFi ecosystem remains an ongoing issue. As the overall space is still small, the governance tokens which are used as incentives to attract liquidity do not yet have significant values and given the high yields expected in the DeFi space, the resulting liquidity is still much smaller compared to the big, well-known projects on other chains.

A possible angle to attain this is the YOU price, as it directly affects the value of the rewards. The youves team is working on a unified staking pool which will use the platform profits to start buying back YOU tokens from the market and pays out YOU rewards. Furthermore, the staking pool will incentivize long term savings.

The expectation is that as a consequence there will be less selling pressure on the YOU token and eventually an upward trend in its price. The hope is that this will create a virtuous cycle in which higher YOU prices lead to more liquidity, more platform activity and in turn to higher YOU prices still.

Emerging ecosystems often need some extra push to get started. As such the incentivisation of liquidity with tokens makes perfect sense. However, users need to be aware that the very high yields which can be achieved in yield farming will not be around forever, as they are just not sustainable.

The DeFi world will have to find other ways to incentivise liquidity. For some select tokens, a mechanism like liquidity baking may be the solution. For the rest it may be through higher transaction costs, or maybe some form of protocol/project owned liquidity. A great deal will depend on attracting sufficient natural buyers and sellers in each market to create some base trading volume.