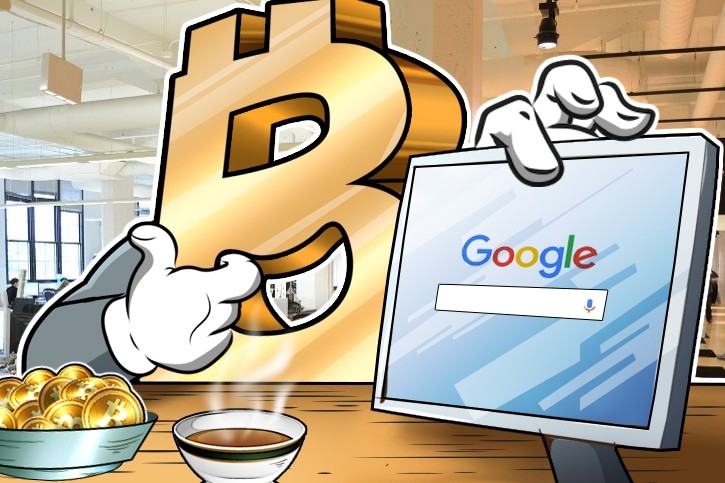 During 2017, the instances of ‘Bitcoin’ being Googled as a term increased by 100%. This search volume witnessed Bitcoin becoming the ninth most visited page on Wikipedia for 2017.

Nick Colas, Data Trek Research’s co-founder is the first analyst to look at Google search figures to track Bitcoin’s next move: he says that the key is looking into Google search and wallet growth.

During the discussion with CNBC’s Trading Nation, he said probing out the number of people who search the term ‘Bitcoin’ online would be an excellent source to analyze where precisely the interest is generated. Bitcoin has approximately 60% market share of search globally, he added, stating: “The data does show the same price trends that we saw for the past 90 days.”

One possible reason for higher volatility was speculation, but as identical as demand/supply factors, Google searches account for price volatility. Bitcoin, which was trading at $20,000 in mid-December 2017, has collapsed between the range of $10,000 to $12,000 during the first few weeks of this year.

Colas explains this further: “Bitcoin searches have trailed off. So, the interest levels show you where Bitcoin has these big breakouts and then pullbacks,”

The increasing search volume of Bitcoin and its related keyword has become the most speculative intangible asset of all time. According to the reports, the bitcoin page was visited roughly 15,026.561 times during last year.

Colas also noticed that the competitive search volume of Bitcoin had led more digital wallets to be set up to store bitcoins. The report states that at December 8th, counts vital search record, which is why Bitcoin crashed to $11000 or below next historical hit of $20000 during December 18th 2017.

He concluded by adding, “From this point on, we just have to look for the beginning of good news that will re-accelerate wallet growth to make the thing go higher.”

Curiously, if Bitcoin was the first term to search more deeply in crypto space, then what would be the other cryptocurrency where investors can try out their money and expect a possible return? Try your own Google search and see!

Mike Ryan, who is the chief investment officer at UBS wealth management, said in response to the question: What’s the relationship between the rapid rise and fall in Bitcoin’s value? “We have had this question all around the world, but we joke that most of the people asking the questions are journalists.”

Since Nakamoto is still anonymous, no identity can regulate vicious volatility and analysts like Colas, Ryan, and Mr. Dimon continue predicting the future of cryptocurrency.