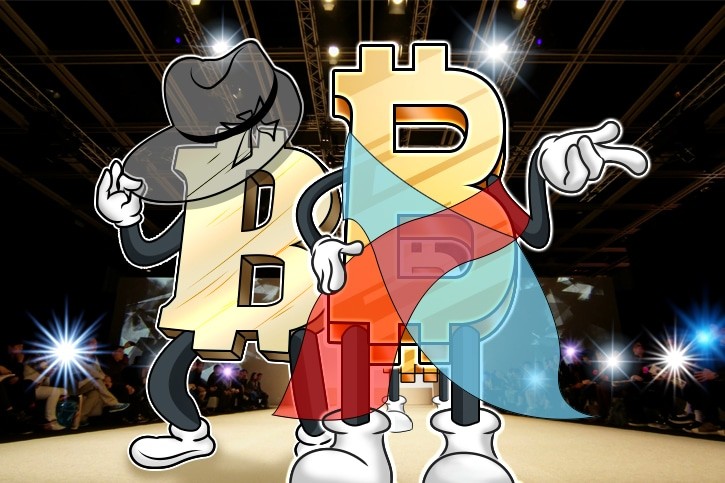 Bitcoin has made it to the fashion catwalk…unofficially that is.

Since it first came on the scenes in 2009, the number one digital currency has grown to incredible heights. At the end of 2017, Bitcoin was within touching distance of $20,000 for the first time. Of course, while the start of 2018 is proving particularly tough for the market that doesn’t seem to be stopping the flow of interest from all sides.

Such is the attraction that the cryptocurrency market is creating, the fashion industry can no longer ignore it.

This is evident by the Ovadia & Sons men’s show that took place on 6th February at the New York Fashion Week. Inspired by twin brothers Ariel and Shimon Ovadia, the 35-piece collection consisted of leopard print and punk plaid.

According to a report from Vogue, the collection was shaped by musical influences that the two brothers have enjoyed listening to: Elvis, My Chemical Romance, Underoath, and the Clash. The result has produced a ‘punk-gone-West’ look for this year’s New York Fashion Week.

Yet, aside from the array of checked jackets, the velour pants, patchwork denim, or even the hand-knitted jumper of a rodeo man swinging a lasso, the most notable feature is the teal dress shirt with the words ‘Bitcoin accepted. No cash’, along with the digital currency’s logo.

This is the first instance that the cryptocurrency has been spotted at a global fashion week, yet it could signal how mainstream the currency is becoming within the fashion industry.

While it may be interesting as to why the brothers included Bitcoin in their latest collection, it could also be looked at as a neat reference to the hub of billionaires found along America’s West Coast in Silicon Valley: a merging of the past and future perhaps to greater things?

It’s also a timely coincidence that a New York lawmaker has called for the study of a state-backed digital currency. The bill, which was filed on 2nd February, demands a task force be put in place to ‘study the impact of a state-issued cryptocurrency on the state of New York’.

Interestingly, while this may be the first time for Bitcoin to be seen on a global catwalk it’s certainly not for its underlying distributed ledger, the blockchain.

In 2016, it was reported that fashion label Babyghost had teamed up with Shanghai-based Blockchain-as-a-Service company, BitSE, and its VeChain project, to bring the distributed ledger to Shanghai’s Fashion Week. For Babyghost’s 2017 Spring and Summer collection it demonstrated how fashion and technology can come together seamlessly.

By verifying a clothing collection on the blockchain through Near Field Communications, or by scanning a QR code on the clothing label, a person is able to determine whether an item is genuine or not with the help of the VeChain and its unique IDs. VeChain is a cloud product management solution integrated with the blockchain technology that focuses on anti-counterfeiting, supply-chain management, asset management, and client experiences. Furthermore, Babyghost and VeChain were able to show the ‘stories’ of where 20 items of clothing had come from that were showcased by the models.

The recent Blockchain Fashion Week in Kiev further highlighted how the distributed ledger can be brought to the fashion world through joint development.

Whether it’s Bitcoin or the blockchain, making it to the fashion world demonstrates the impact both are having. And regardless of people being against the digital currency, its reference in the fashion industry could further boost its trendsetting status.

It would be interesting to see what Satoshi would make of it all!