The Republic of Estonia’s e-Residency programme, a government initiative that aims allows global citizens to register and run an EU-company online, has announced plans to launch crypto token “estcoin” by launching an initial coin offering (ICO). 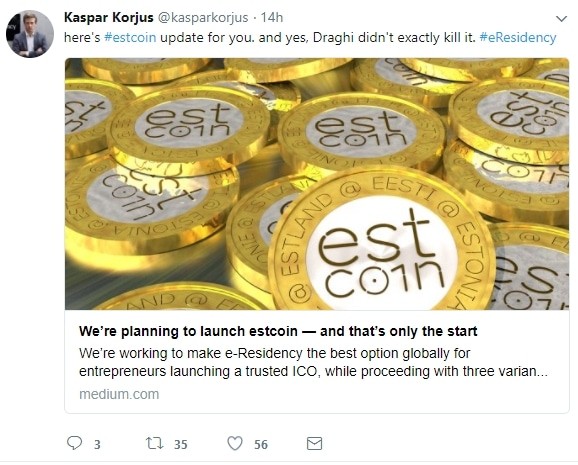 e-Residency managing director Kaspar Korjus wrote in an official blog post that explained how the government start up would provide the platform for distributing and trading estcoin globally through a secure digital identity that anyone in the world can apply for. Korjus said:

“From Estonia’s perspective, estcoins were proposed as a way to raise money and support for the development of our digital nation from more people around the world. We would also want to structure the tokens so that they help build our e-resident community and incentivise our own key objective, which is to increase the number of companies started in Estonia through e-Residency.”

Korjus further revealed that several companies were in the process of launching ICOs in Estonia through e-Residency, while various others are planning theirs and are already exploring how to integrate the e-Residency card into their KYC procedure.

He added that “we can provide clearer guidance on how to legally and responsibly launch an ICO within our regulatory environment.”

The idea had originally been suggested in an earlier article in August on the same blog that drew mixed reactions from the international community; support from the crypto sphere and criticism from political and economic institutions.

The European Central Bank’s president Mario Draghi was harsh in his assessment, saying that “no member state can introduce its own currency; the currency of the euro zone is the euro.”

The EU has generally been careful around the subject of crypto currencies, although some moves have been made by national regulators in the region such as that of non-EU member Switzerland to investigate ICOs launched from the country. Last week, EU legislators agreed to be stricter with crypto currency exchanges, as part of efforts to combat money laundering, tax evasion and terrorism financing, a move that will spend the end of anonymous transactions on exchanges and operations.

According to management consultancy Deloitte, Estonia has received €14.4m from e-residents in the first three years of the program, a number expected to rise to €1.8b by 2025.