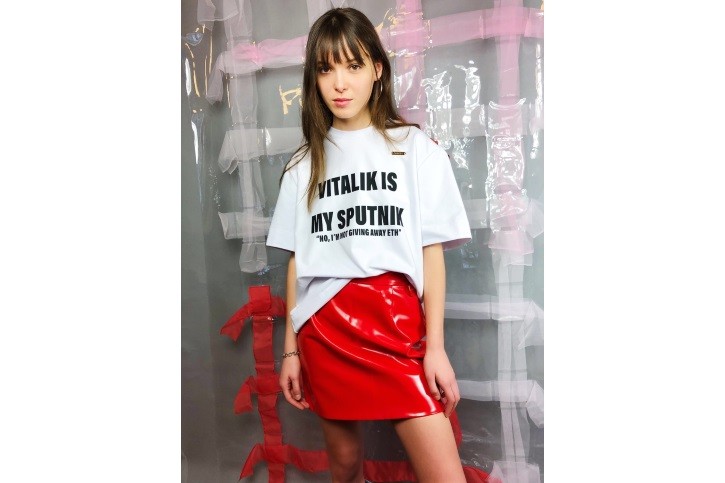 Anna K, the eponymously-named fashion brand called after its designer, Anna Karenina, is back making noises in the cryptoworld again, this time with a crypto auction. In January, the ’30 under 30’ star according to Forbes created a splash when she launched her concept of a crypto FashionCoin at Fashion Days in Kiev. Her latest collection shown on the catwalks in Kiev was fixated on crypto, using tag-lines such as ‘In Coin We Trust’ emblazoned on t-shirts. The world’s first fashion on the blockchain conference was held at the same time in Kiev.

Now AnnaK has launched a world first: a crypto auction for her designer t-shirts. The slogan this time is Vitalik is my Sputnik. There are ten limited edition t-shirts available to purchase using Ethereum smart contracts. These are dedicated to the creator of Ethereum, Vitalik Buterin. People are invited to tender for tokens, which can be used to obtain the exclusive t-shirt. There are ten t-shirts in total which will include the name of the successful bidder in each case.

An additional, two t-shirts by Anna K were produced for Vitalik Buterin and herself. Anna will present Vitalik with his t-shirt at the Forbes magazine ‘30 Under 30’ summit in Tel Aviv, Israel in May. Anna K made the Forbes ‘30 Under 30’ in 2017 in two categories (Youngest, and The Arts), and Buterin was listed in 2018 in the finance category.

“I want to change the existing fashion system. Fashion in its purest form is a medium for

dialogue between the young, creative and talented, however now the industry is based on old capital and historic brands. I am convinced fashion should correspond to the current lifestyle of my generation Z: crypto is now cooler than a skateboard. Vitalik Buterin and his project Ethereum inspires me, it’s a revolution. That’s why I decided to create a unique and limited collection dedicated to Vitalik, and will present it at auction for ETH.” Anna K says.

The meaning of the print is a play on the words “Vitalik-Sputnik” and the ambiguity of the word ‘Sputnik’ which has an English usage come to refer to satellites, but in its original sense meant ‘companion’.

The first auction begins on April 17th. The token is a hash of the slogan – VITALIKISMTSPUTNIK

The wallet will be live tomorrow at this web address

Bidders will be invited to send ETH to the address that will be made available tomorrow. The first auction begins at 12 noon GMT and ends at 11:59 the following day. The lot is described as a limited unisex t-shirt with the slogan plus ‘I’m not giving away eth’ written underneath.

Each t-shirt will be auctioned in a separate day, from t-shirt #10 down to #1. The highest bid will be successful and the other bids returned once the auction is finished. The successful bidder, upon receiving the winning token, will then contact AnnaK to discuss the customization of their t-shirt, which they will then receive within ten days.