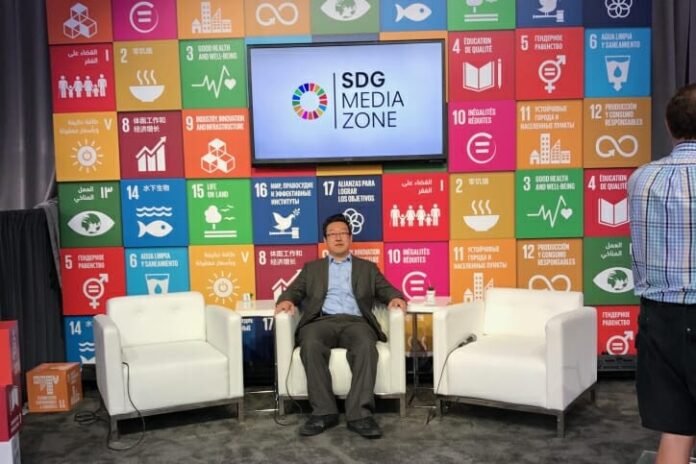 If you lost a sibling to starvation the tragedy might take you down with it – or create a drive to not only avoid a similar fate but to make a difference in the world. This is the tragedy that formed David Kam’s thinking. An immigrant with his parents arriving in Canada, David was very conscious of his ethnic background. A member of the Hakka people from China, his indigenous culture spoke of owning no land, of being a displaced tribe – while Hakka literally translates as “outsiders” or “guest family”.

He studied engineering in Canada before segueing into bottled drinks, creating an energy drink that he called E=MC2 in 1993. He pitched it again and again to Pepsi Cola executives receiving numerous rejections as he was ahead of his time. Finally he found a line manager who had 20% latency on his production line and was willing to take a risk. Within a matter of years, his energy drink was outselling the Pepsi brand and generating greater profit margins.

So far so good. Then, in 2000, Kam experienced a number of further personal tragedies: his father died, his Godsister lost her entire family in an air accident and he had a personal epiphany on what he wanted to do with his life.

The result is a major project called Earth Dollar. This project is wide-ranging and links back to Kam’s own Hakka culture – of being displaced and subjected to extreme poverty as a result.

There are three main elements to Earth Dollar. The first is the concept of Natural Capital Assets. Natural capital can be defined as the world’s stocks of natural assets which include geology, soil, air, water and all living things.

So it is possible to calculate and measure these assets, not only in terms of sustaining human life, but also in financial terms.

The second element is indigenous nations. These are nations or tribes who have retained their source indigenous cultural elements in this modern world. There are two distinct indigenous nations and lands – ceded land (aka ancestral land) and unceded land. Unceded land means the indigenous natives’ land has never been lost through war, conquest, sales, treaty or any reason whatsoever. In a recent landmark case known as “Tsilqhot’ vs British Columbia”, the Canadian Supreme Court recognized the rights of indigenous tribes’ unceded land, so too in Ghana. Now, as Kam sees it, the next step is to return prosperity to these indigenous nations through their Natural Capital Assets.

Already Kam is setting up smart contracts with the leaders of indigenous nations. The platform, based on blockchain, follows the UN Sustainable Development Goal No 1: End Poverty in all forms, which aims to overcome poverty and create a sustainable world. Earth Dollar has added an 18th goal to help these indigenous nations. This is the third element. Smart contracts will be used to protect the land and the nations and will be agreed between Earth Dollar at four levels: leaders of the community; traditional government; elders in the community; and finally the people themselves.

It is also asset-backed. The Earth Dollar represents the largest deployment of NCA on the blockchain. An initial estimate of €3.22T euros in natural capital assets representing the fruits of the land (usufruct), such as fresh water, carbon credits, mineral rights, hemp farms etc. is being used to back the value of the Earth Dollar.

“Right now this project is to protect the NCA of indigenous nations – not just the land but everything below the land and above,” he says. “But in time, the blockchain is a perfect vehicle for monetizing Intellectual IP and artistic provenance. Some of the biggest assets in the world are intangible – ideas, art and music. Blockchain will allow us to record them and, in turn, help some of the most powerful in terms of possible and positive influence but least powerful in terms of financial security.