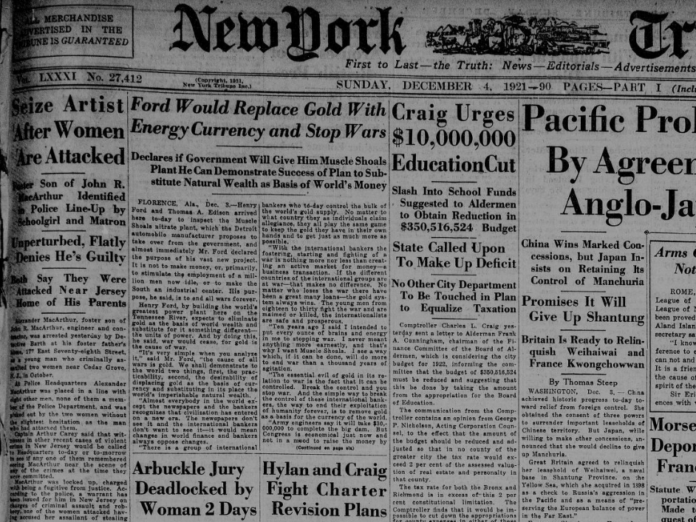 A recent article from digital asset manager Charles Edwards reveals that the great American industrialist Henry Ford had a vision for bitcoin almost 100 years ago.

Ford believed that an “energy currency” could one day replace gold and even go so far as to end wars. From the original 1921 article:

“Henry Ford, by building the world’s greatest power plant here on the Tennessee River, expects to eliminate gold as the basis of world wealth and substitute it for something different – units of power. And by doing this, he said, war would cease, for gold is the cause of war.”

Renewable Energy For the Bitcoin Win

He could not have imagined the cryptographic version that we find ourselves with today. But he sure understood the value of proof-of-work that makes bitcoin the most secure blockchain around.

And as we know, a vast majority of miners seek out cheap renewable energy, just like Ford’s plan to harness the hydroelectric power of the Tennessee River. It’s no surprise that even big business is betting on blockchain in the renewable energy sector.

An Early Vision for a Decentralized Currency

Ford believed that the control of gold was responsible for so many of humanities problems:

“There is a group of international bankers who today control the bulk of the world’s gold supply… the way to end their exploitation of humanity forever, is to remove gold as a basis for the currency of the world.”

The irony is that this same trend is happening today. Central banks continue to print money in record amounts using their positions of power to hoard massive amounts of both fiat and gold:

Central banks have been buying nearly 20% of the world's gold supply, approaching the highest levels since the Nixon era, compared with being net sellers from 1971 through 2010: Bloomberg Intelligence's @mikemcglone11 pic.twitter.com/akT70puDRL

Ford did not explain how his new energy currency would fix this problem. And that’s where bitcoin comes in. The flagship cryptocurrency still has its challenges, but by and large, it introduces a key concept into money management: decentralization.

Nobody can inflate away the value of bitcoin by printing more, and its distributed ledger ensures that no single authority has control over it.

The First Legitimate Energy Currency May Be Just Around the Corner

Edwards, The Energy Standard, goes on to explain some of the power mathematics that is securing the network today. Suffice to say that bitcoin has never been in greater shape:

1 Bitcoin today is backed by 1.66 trillion kWh of energy and growing.https://t.co/DaomhKjm1F

If Ford had an issue with the precious yellow metal back in 1921, then he would surely be turning in his grave after Nixon came off the gold standard some 50 years later.

Now another 50 years on and bitcoin may soon take that mantle. And with it have fulfilled Ford’s vision of the world’s very first legitimate energy currency.