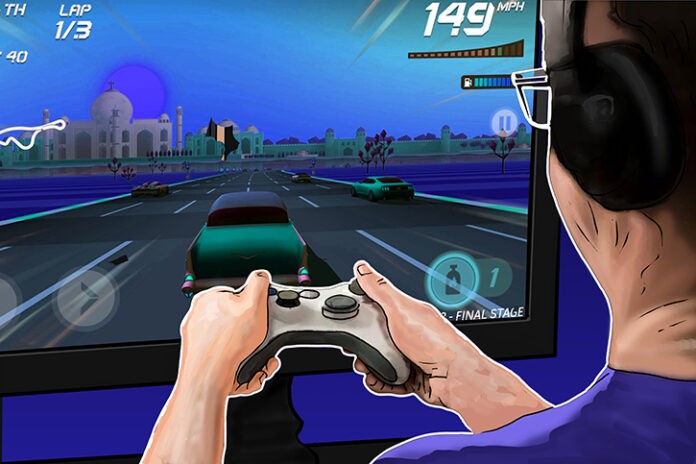 Blockchain and gaming – it’s a merger heralded by some as a match made in heaven. But why? What does cryptocurrency have to do with gaming, and what are the benefits of blockchain in the video gaming industry?

For people who aren’t too familiar with cryptocurrency, it can be extraordinarily confusing – and I’m going to do my best to summarize it and confuse you even further.

There’s are myriad cryptocurrencies out there, all under their own unique “brand” name, trading at different prices on the market, and new ones cropping up with regularity. Unholy regularity. It’s important to remember that different coins address different needs – Bitcoin is the original cryptocurrency, being started in 2008, and they’re pretty much used for anything. Sending money to friends, purchasing online, buying illegal drugs on black-market websites, etc.

Then you have altcoins which are basically alternatives to Bitcoin. But some of the most popular altcoins are much more than Bitcoin competitors, they have their own unique purposes. Ethereum, for example, is the second most popular digital currency behind Bitcoin, but Ethereum was not intended as a digital currency in the same vein as Bitcoin. Rather, Ethereum introduced “smart contracts”, which aside from letting Ethereum be used as a digital currency, also allows Ethereum users to be used as, for example, share representations, or block votes.

There are gamer-specific altcoins, like GameCredits and Nexium, which are typically used for purchasing game subscriptions or in-game items / in-app purchases. Utilizing GameCredits as a purchase method offers benefits to game developers over traditional methods like bank cards or Paypal, because it offers a higher commission on its mobile platform and utilizes a wide variety of “chargeback protection”, which frequently occurs to developers through PayPal.

But it’s not only the developers that benefit from implementing cryptocurrency purchasing methods. From a gamer perspective, the gaming industry has been massively itemized – the list of mobile games, for example, that don’t offer in-app purchases ranging from unique weapons, character skins, or other game perks, is generally quite small. The “freemium” model has de facto become the most common business model for mobile games.

So, in this current freemium model, technically you “own” your account, your character, the items you purchase, etc. but you don’t really “own” them to the extent that your character and IAP items can be traded unless the game supports some sort of P2P trading. A key example of this would be Blizzard’s RMAH (Real Money Auction House), a controversial addition in Diablo 3 that allowed players to sell virtual gear for real money from other players, with Blizzard taking a percentage. This was later removed for a number of reasons.

To illustrate the point in a vastly oversimplified way, consider blockchains in gaming a cryptocurrency-fueled RMAH. The idea is that all IAPs you make in a game will be through the blockchain, and those IAPs will be stored on your cryptocurrency wallet, not your game account. Thus, you will actually completely own your IAPs, and be able to freely trade them with other gamers, even across games. Or you could “liquidate” all your IAPs into more cryptocurrency.

This sounds fairly amazing on paper, especially for people who have an interest in making money from virtual goods (Chinese gold farmers, I’m looking at you). But the system doesn’t come without drawbacks – here we need to herald back to the reasons why the RMAH was removed from Diablo III.

The RMAH unbalanced the game design of Diablo III and turned it from a “grind -> loot epic gear” game into a “grind -> sell gold on RMAH” game – and it nearly destroyed the in-game economy. Blizzard tried various methods to “balance” (significantly reduce) the amount of gold players earned in the game, which ended up severely unbalancing the game for newcomers who couldn’t afford the most minimal of gear.

If games become designed around looting and selling gear for cryptocurrency, not only will we probably see severe game-economy balancing issues (and server-owners tweaking drop-rates in their favor) what’s to stop the Communist uprising of Chinese gold farmers from taking over the world? (Okay, I’m using hyperbole, but bear with me). This could be mitigated if the blockchain is solely limited to IAPs, where you’re only allowed to trade / cash-out items that you paid for.

The only way this would work is if multiple games shared the exact same data structure, which is technically impossible in complex MMOs, and so what exactly are we hoping to achieve? A bunch of CryptoKitties clones, a new genre called “Asset-Speculation Gaming”? No, DigitalTrends, decentralized MMOs are not the future of gaming – multiple games built specifically for using your blockchain-stored character across them would be silly, since databases are faster and you’d need to trust a centralized authority in any case. Small Io games like Lordz.io? Sure, maybe, if there’s a healthy balance of players with endless time vs players with large wallets, which is what cash-based loot-and-sell games would essentially boil down to.

Game design balance issues and outlandish buzz-talk aside, the whole idea does offer benefits to the players. For one, it’d be a much more secure way of selling or trading items. Right now, there’s a large black market for in-game items. You can go on eBay and purchase rare World of Warcraft equipment, for example, but this black market is also plagued with scams; either fake sellers or buyers who make chargeback claims because “virtual goods” aren’t covered by PayPal.

If large game developers got on board with the blockchain, it would offer a layer of protection for players selling their loot. But then we’re just making games that cater to the gold farmers – legalizing the black market for video game loot by making it “safer” will just wreak havoc on game economies, and its Diablo’s RMAH all over again.

In a nutshell, if blockchain has anything to offer the gaming industry, it will be through cryptocurrency-based platforms, like the earlier mentioned GameCredits, Nexium, and Robot Cache; cryptocurrency-based alternatives to Steam, which allow you to resell your games, basically. But decentralized MMOs with RMAH’s? You’d have more luck getting through the first level of World’s Hardest Game.