At the time of this writing, 0x has a price of $0.2511 USD, which puts it down by approximately 0.08% from yesterday. Yesterday’s down day is a reversal of the day before it; in terms of trend, though, note that the current price is now 38.95% above its 20 day moving average, and is currently in an up trend over the past 14 days. 0x’s expected trading range — as forecasted by the Bollinger bands indicator, which determines a range based on momentum and volatility over the past two weeks — is between $0.10798 and $0.25345. Given its boundaries, rangebound traders may find it compelling to entertain selling, as we are nearer to the top of the range. 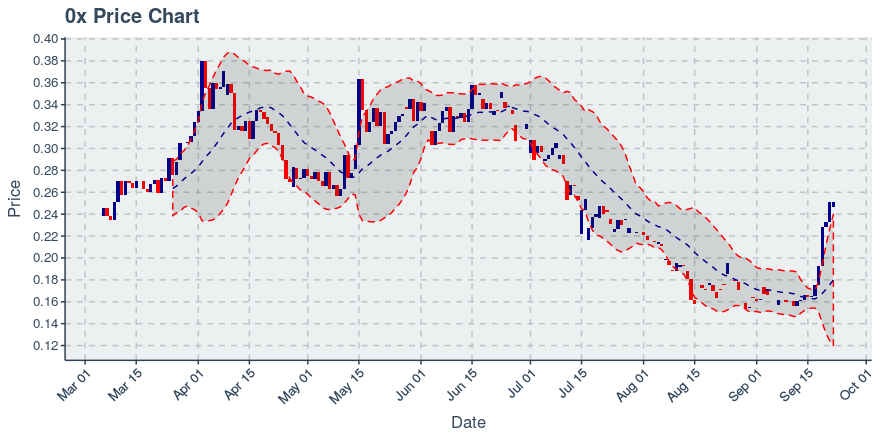 The currency’s market cap currently stands at $148 million US dollars.

Yesterday we did not see any transfers amongst holders of 0x. Regarding a tally of holders, Yesterday saw 0x’s wallet count drop by 0. To provide context, we’d rank this token as 1 out of the 30 Ethereum tokens in our index based on percentage growth in engagement over the past 7 days.

The last activity date on 0x’s GitHub repository was September 21, 2019, or about 1 days ago. To understand how code development is progressing, we can observe growth rates over the past 30 days in the number of open issues and the number of watchers: open issuers have been growing at about 0.57 per day, while the number of followers watching 0x’s repositories is growing by 1.4.