Paxos Standard is up by approximately 0.1% from the previous day, with its price currently hovering around $1.003 USD. Paxos Standard is currently in a unclear , and it should be noted that this is now the the 2nd day in a row that price has been up. Moreover, Paxos Standard is now 0.18% above its 20 day moving average. In terms of an expected trading range, the Bollinger bands on Paxos Standard suggest price may bounce between $0.998722 and $1.003658 based on its momentum and volatility over the past 14 days. Given its boundaries, rangebound traders may find it compelling to entertain selling, as we are nearer to the top of the range. 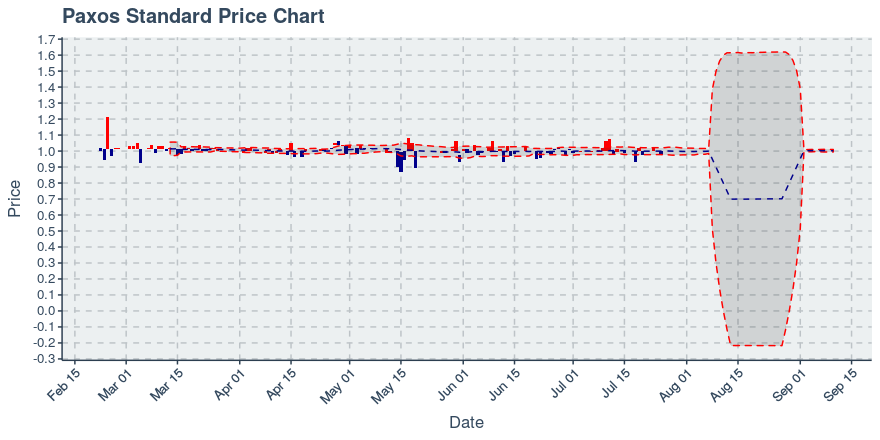 As for Paxos Standard’s market cap, it is currently at about $237M US dollars.

Since yesterday, Paxos Standard saw anomalous behavior in transfers added. It may be worth looking into the causes of this a bit more.

Over the past 24 hours, 1,685 transfers have been added to the blockchain recording transactions amongst holders of Paxos Standard. As for the number of holders, yesterday saw the number of wallets holding Paxos Standard jump by 119. If we observe percentage growth in holders and transfers, we find that Paxos Standard ranks 7 out of the 31 Ethereum tokens we are tracking.

How are the Strong Holders of Paxos Standard Faring?

In terms of how active the software development team working on Paxos Standard is, it may be worth observing that the last time any work pertaining to code was done on their GitHub code repository was on September 06, 2019, or approximately 4 days before. To understand how code development is progressing, we observed the growth rates in the number of open issues and the number of users following Paxos Standard on GitHub; we found no growth in both of those metrics over the past 30 days, suggesting code is either being maintained elsewhere or code development as stopped.