Enjin Coin: What’s the Latest Regarding its Price?

Enjin Coin’s current price, at the time of this writing, is $0.07184 USD, down by approximately 3.97% from the day prior. Enjin Coin enters the day 2.85% below its 20 day moving average, and is experiencing its the 3rd day in a row down. Enjin Coin’s expected trading range — as forecasted by the Bollinger bands indicator, which determines a range based on momentum and volatility over the past two weeks — is between $0.059855 and $0.088036. Price’s current proximity to the bottom of the range may make buying an attractive opportunity to traders interested in trading the range. 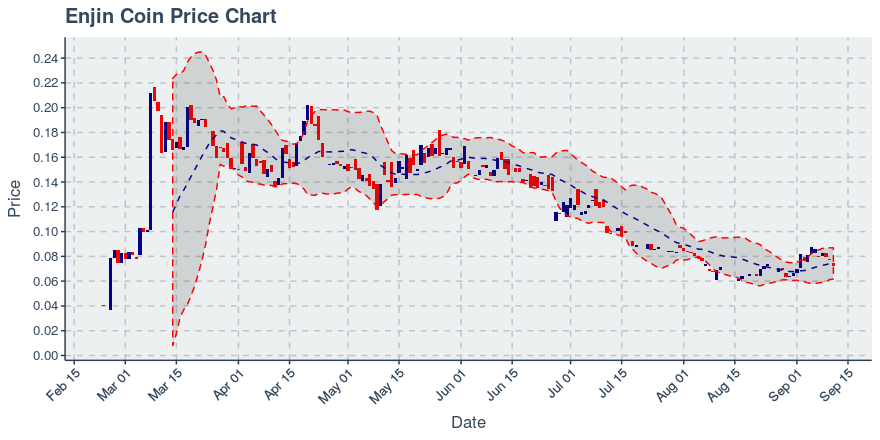 The market capitalization of Enjin Coin, or the amount of US dollars it would take to buy up all the circulating coins, is currently estimated to be $58 million.

Enjin Coin’s Surprises of the Day

The following metrics showed unusual change over the past 24 hours for Enjin Coin: holders added and transfers added. Further investigation may be warranted.

Yesterday saw 1,014 transfers amongst holders of Enjin Coin. In terms of estimating the number of holders, over the past day the total number of wallets holding Enjin Coin has gone up by approximately 132. Our engagement rank, which combines weekly percentage growth in number of holders and number of transfers, has Enjin Coin ranked 16 out of the 32 Ethereum tokens we’re tracking.

How are the Strong Holders of Enjin Coin Faring?

The Latest on Enjin Coin and Social Media