Paxos Standard’s current price, at the time of this writing, is $1.001 USD, up by approximately 0.1% from the day prior. The past 24 hours mark a reversal in price from the day prior; it should be noted, though, that price is still in a unclear trend, and is currently 0.03% above its 20 day moving average. Staying above this level may be critical to sustain short-term momentum. Traders looking for a range to trade within may wish to note that the Bollinger bands (a price indicator based on recent momentum and volatility) for Paxos Standard imply the currency may oscillate between $0.998117 and $1.003183, based on how price has behaved in the two weeks prior. Price’s current proximity to the top of the range may make shorting an attractive opportunity to traders interested in trading the range. 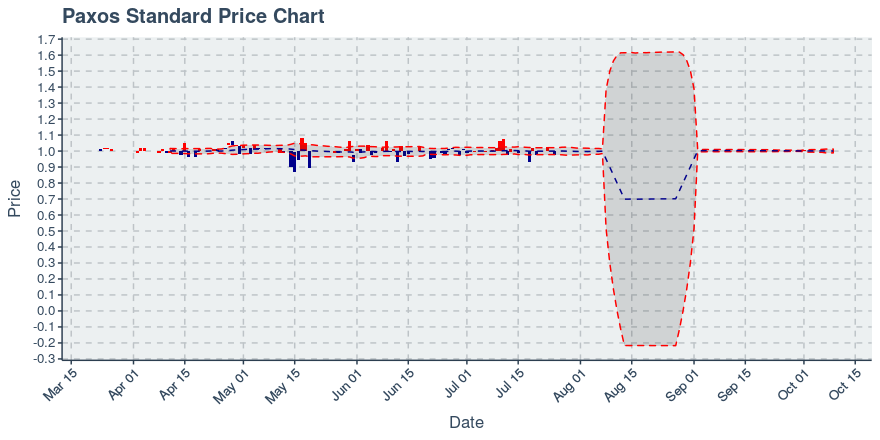 As for Paxos Standard’s market cap, it is currently at about $260M US dollars.

How are the Strong Holders of Paxos Standard Faring?

Paxos Standard hasn’t had any activity on any of its GitHub repos since October 08, 2019 — 1 days prior. Growth rates for open issues — a “”to-do list”” of sorts and watchers (“”subscribers”” following a code repository) for Paxos Standard were completely flat over the past 30 days; in other words, there has been no development work reported on GitHub over the past month.

In terms of social media presence, Paxos Standard saw its Twitter followers go up by 6 over the past 24 hours. Twitter appears to be the most popular place to follow the company, and thus may be worth monitoring. Here is the Twitter page for Paxos Standard.