Enjin Coin: What’s the Latest Regarding its Price?

Enjin Coin’s current price, at the time of this writing, is $0.06643 USD, down by approximately 0.14% from the day prior. Yesterday’s down day is a reversal of the day before it; in terms of trend, though, note that the current price is now 6.94% above its 20 day moving average, and is currently in an up trend over the past 14 days. In terms of an expected trading range, the Bollinger bands on Enjin Coin suggest price may bounce between $0.052293 and $0.071944 based on its momentum and volatility over the past 14 days. Given its boundaries, rangebound traders may find it compelling to entertain shorting, as we are nearer to the top of the range.

Trade Enjincoin (ENJ) and over 500 other cryptos across ten different exchanges — all from one app. Try Quadency. 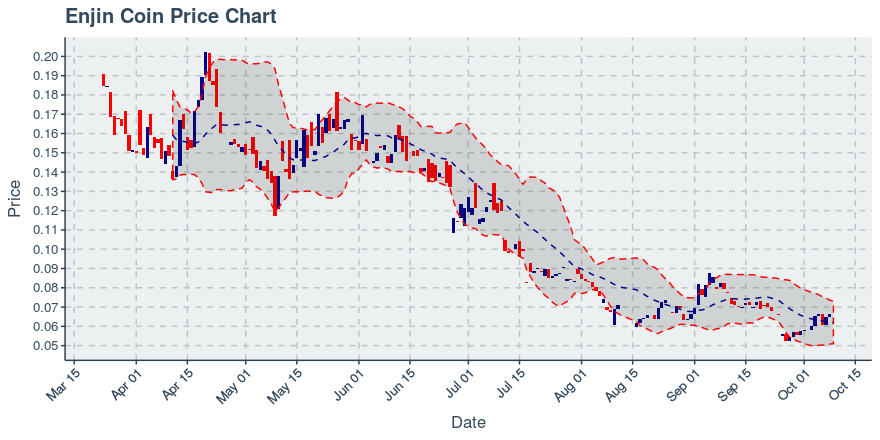 As for Enjin Coin’s market cap, it is currently at about $52M US dollars.

822 transactions amongst holders of Enjin Coin occurred yesterday. As for the number of holders, yesterday saw the number of wallets holding Enjin Coin increase by 26. If we observe percentage growth in holders and transfers, we find that Enjin Coin ranks 14 out of the 32 Ethereum tokens we are tracking.

The last activity date on Enjin Coin’s GitHub repository was October 08, 2019, or about 1 days ago. Growth rates for open issues — a “”to-do list”” of sorts and watchers (“”subscribers”” following a code repository) for Enjin Coin are growing by 0 and 0.3, respectively, over the past 30 days.

The Latest on Enjin Coin and Social Media