At the time of this writing, 0x has a price of $0.2696 USD, which puts it up by approximately 3.77% from yesterday. 0x enters the day 20.27% above its 20 day moving average, and is experiencing its the 3rd day in a row up. In terms of an expected trading range, the Bollinger bands on 0x suggest price may bounce between $0.185793 and $0.262537 based on its momentum and volatility over the past 14 days. Given its boundaries, rangebound traders may find it compelling to entertain shorting, as we are nearer to the top of the range. 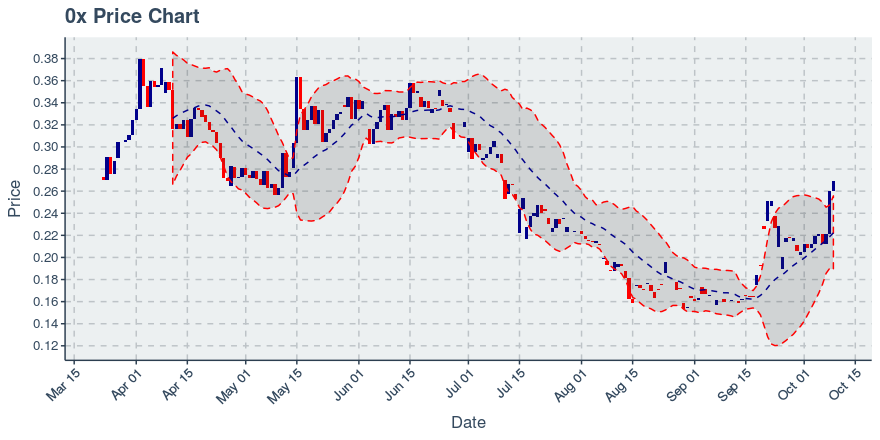 The market capitalization of 0x, or the amount of US dollars it would take to buy up all the circulating coins, is currently estimated to be $156 million.

2,759 transactions amongst holders of 0x occurred yesterday. Regarding a tally of holders, Yesterday saw 0x’s wallet count increase by 248. To provide context, we’d rank this token as 15 out of the 32 Ethereum tokens in our index based on percentage growth in engagement over the past 7 days.

The top 1,000 0x wallets hold over 89.49% of the token’s total money supply. The percent of the currency that is owned by wallets that are both belonging to exchanges and in the top 1,000 richest wallets of the token comes out to 5.01% of the currency’s money supply. Exchange ownership grew by -0.01% over the past week, while the overall ownership percentage of the top 1,000 richest wallets grew by -0.11% over that time period. As for the 0x’s smart contract itself, that owns 0.01% of the total money supply, an amount unchanged from the week prior.

In terms of how active the software development team working on 0x is, it may be worth observing that the last time any work pertaining to code was done on their GitHub code repository was on October 09, 2019 (today). Over the past 30 days, we’ve seen open issues across 0x’s GitHub repositories grow by 0.33 per day on average, while the number of watchers has grown by 1.9.

If you are interested in following 0x on social media, Twitter, where it has 151,142 following it, may be a good place to start. Here is the Twitter page for 0x.