0x’s current price, at the time of this writing, is $0.3044 USD, down by approximately 4.34% from the day prior. The down day for 0x yesterday was a reversal from the day before it, which puts its price at 22.39% above its 20 day moving average. Over the past two weeks, price has been in an up trend. Traders looking for a range to trade within may wish to note that the Bollinger bands (a price indicator based on recent momentum and volatility) for 0x imply the currency may oscillate between $0.172671 and $0.324759, based on how price has behaved in the two weeks prior. Price’s current proximity to the top of the range may make selling an attractive opportunity to traders interested in trading the range. 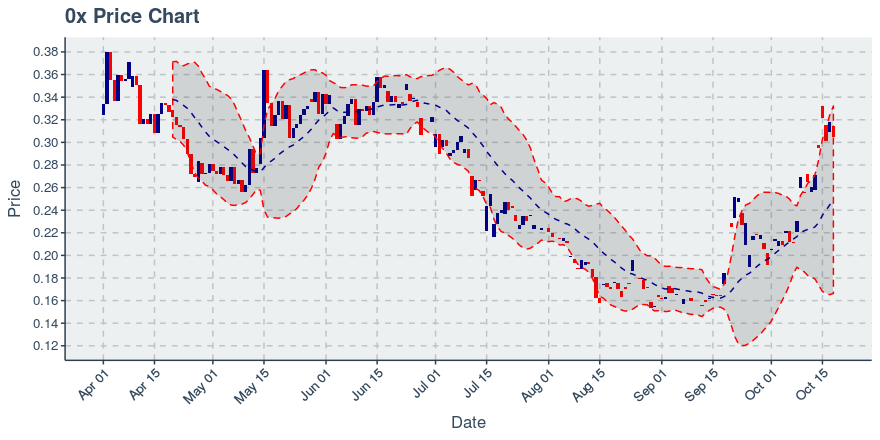 The currency’s market cap currently stands at $189 million US dollars.

Since yesterday, 0x saw anomalous behavior in holders added and transfers added. It may be worth looking into the causes of this a bit more.

-1,003,610 transactions amongst holders of 0x occurred yesterday. In terms of estimating the number of holders, over the past day the total number of wallets holding 0x has gone up by approximately 393. To provide context, we’d rank this token as 34 out of the 34 Ethereum tokens in our index based on percentage growth in engagement over the past 7 days.

0x hasn’t had any activity on any of its GitHub repos since October 17, 2019 — 1 days prior. To understand how code development is progressing, we can observe growth rates over the past 30 days in the number of open issues and the number of watchers: open issuers have been growing at about 0.57 per day, while the number of followers watching 0x’s repositories is growing by 1.73.

Social media growth, in terms of Twitter followers and Reddit subscribers, came in at up 95 and 21 over the past day for 0x. If you are interested in following 0x on social media, Twitter, where it has 151,176 following it, may be a good place to start. Here is the Twitter page for 0x.