At the time of this writing, 0x has a price of $0.1467 USD, which puts it down by approximately 2.33% from yesterday. Yesterday’s down day is a reversal of the day before it; in terms of trend, though, note that the current price is now 8.75% below its 20 day moving average, and is currently in a unclear trend over the past 14 days. To help contextualize yesterday’s price move, we can observe that price has rallied 16 of the past 30 days. As for the volume underlying yesterday’s move, note that the price change occurred on volume that was approximately 71.79% less than its 7 day average volume.

As for 0x’s expected trading range — as forecasted by the Bollinger bands indicator, which determines a range based on momentum and volatility over the past two weeks — is between $0.146776 and $0.174764. Given its boundaries, rangebound traders may find it compelling to entertain buying, as we are nearer to the bottom of the range. 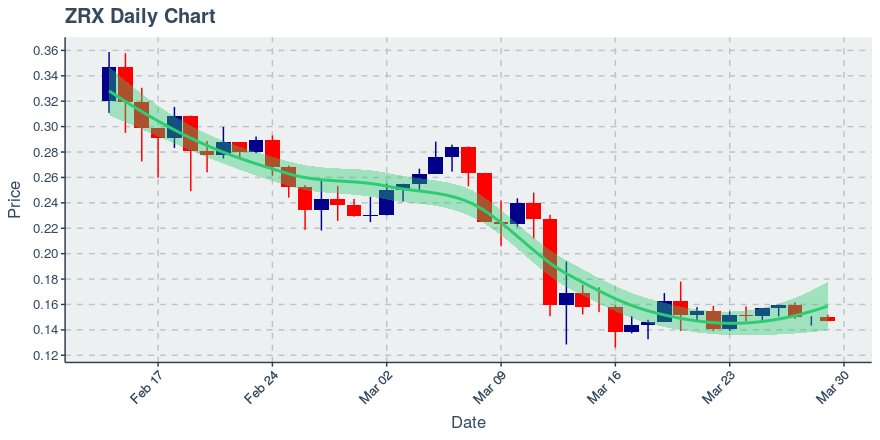 The market capitalization of 0x, or the amount of US dollars it would take to buy up all the circulating coins, is currently estimated to be $94 million.

Yesterday saw 320 transfers amongst holders of 0x. Regarding a tally of holders, Yesterday saw 0x’s wallet count increase by 54. To understand loyalty or repeat usage amongst holders of 0x, we can note that there were 359 wallets making a transaction yesterday, while 9,309 wallets have sent or received tokens in the past month; this imputes a daily active wallet to monthly active wallet ratio of about 0.04.

And in regards to wealth distribution, note that the top 1,000 0x wallets hold over 139.46% of the token’s total money supply. This number is greater than 100% because many of the token holders are not able to sell them yet, and thus their numbers are not included in the supply yet, though they can be regarded as future sellers when they are able to sell. The percent of the currency that is owned by wallets that are both belonging to exchanges and in the top 1,000 richest wallets of the token comes out to 7.58% of the currency’s money supply. Exchange ownership grew by -0.13% over the past week, while the overall ownership percentage of the top 1,000 richest wallets grew by -0.1% over that time period. The underlying smart contract itself for 0x owns 0.02% of the total money supply; over the past week, this amount has not changed.