Chainlink is down by approximately 1.59% from the previous day, with its price currently hovering around $2.286 USD. Yesterday’s down day is a reversal of the day before it; in terms of trend, though, note that the current price is now 9.9% below its 20 day moving average, and is currently in a unclear trend over the past 14 days. From another vantage point, note that price has gone up 7 of the past 10 days. As for the volume underlying yesterday’s move, note that the price change occurred on volume that was approximately 59.73% less than its 7 day average volume.

Traders looking for a range to trade within may wish to note that the Bollinger bands (a price indicator based on recent momentum and volatility) for Chainlink imply the currency may oscillate between $2.180839 and $2.893461, based on how price has behaved in the two weeks prior. Given its boundaries, rangebound traders may find it compelling to entertain buying, as we are nearer to the bottom of the range. 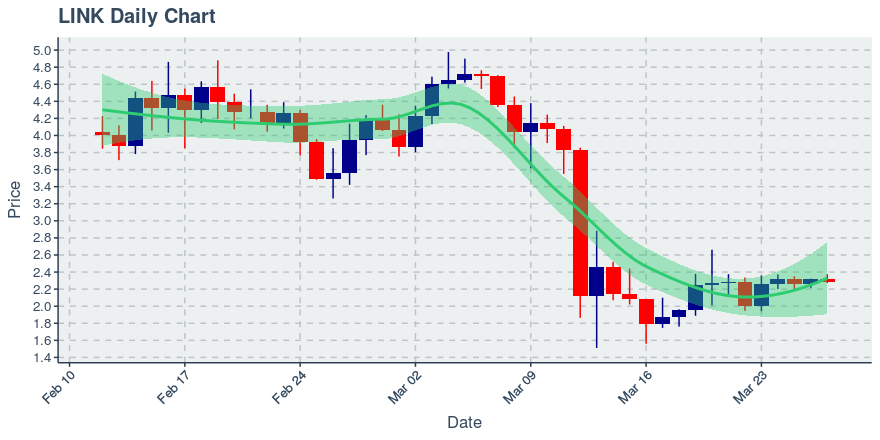 The market capitalization of Chainlink, or the amount of US dollars it would take to buy up all the circulating coins, is currently estimated to be $800 million.

NA transactions amongst holders of Chainlink occurred yesterday. In terms of estimating the number of holders, over the past day the total number of wallets holding Chainlink has gone NA by approximately NA. To understand loyalty or repeat usage amongst holders of Chainlink, we can note that there were 1,134 wallets making a transaction yesterday, while 37,022 wallets have sent or received tokens in the past month; this imputes a daily active wallet to monthly active wallet ratio of about 0.03.

If you are interested in following Chainlink on social media, Twitter, where it has 46,824 following it, may be a good place to start. Here is the Twitter page for Chainlink.