Maker’s current price, at the time of this writing, is $513.52 USD, up by approximately 6.33% from the day prior. Yesterday’s up day is a reversal of the day before it; in terms of trend, though, note that the current price is now 12.11% above its 20 day moving average, and is currently in an up trend over the past 14 days. Maker’s expected trading range — as forecasted by the Bollinger bands indicator, which determines a range based on momentum and volatility over the past two weeks — is between $401.9359 and $514.1711. Given its boundaries, rangebound traders may find it compelling to entertain shorting, as we are nearer to the top of the range. 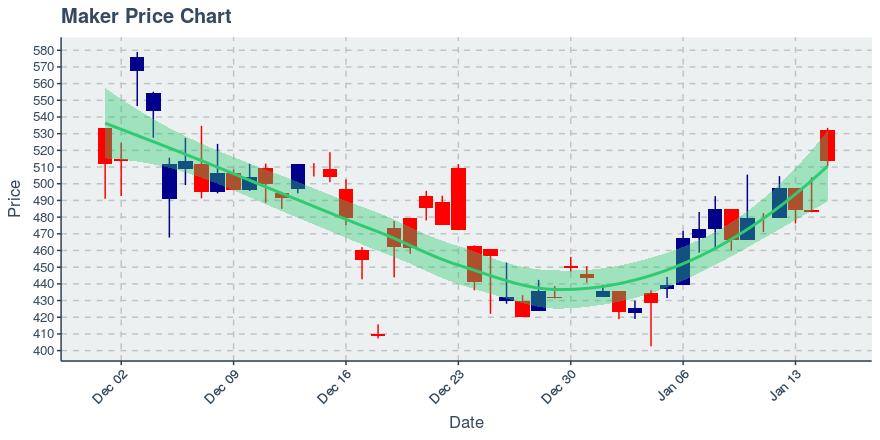 As for Maker’s market cap, it is currently at about $514M US dollars.

1,027 transactions amongst holders of Maker occurred yesterday. In terms of estimating the number of holders, over the past day the total number of wallets holding Maker has gone up by approximately 32. If we observe percentage growth in holders and transfers, we find that Maker ranks 17 out of the 29 Ethereum tokens we are tracking.

Of the coin’s total money supply, the richest 1,0000 wallets currently own 98.2%. If we focus on exchanges, which may be an correlated with liquidity and greater confidence in the currency, the exchange wallets that are in the top 1,000 wallets own 1.33% of the currency’s total money supply. Exchange ownership grew by -0.04% over the past week, while the overall ownership percentage of the top 1,000 richest wallets grew by -0.05% over that time period. Maker’s smart contract owns approximately 0.08% of its own total money supply. This amount hasn’t changed over the past week.

The last activity date on Maker’s GitHub repository was January 14, 2020, or about 1 days ago. To understand how code development is progressing, we can observe growth rates over the past 30 days in the number of open issues and the number of watchers: open issuers have been growing at about 0.43 per day, while the number of followers watching Maker’s repositories is growing by 0.77.

In terms of social media presence, Maker saw its Reddit subscribers go up by 10 over the past 24 hours. Twitter appears to be the most popular place to follow the company, and thus may be worth monitoring. Here is the Twitter page for Maker.