Chainlink’s current price, at the time of this writing, is $2.259 USD, up by approximately 3.15% from the day prior. The past 24 hours mark a reversal in price from the day prior; it should be noted, though, that price is still in an up trend, and is currently 13.86% above its 20 day moving average. Staying above this level may be critical to sustain short-term momentum. In terms of an expected trading range, the Bollinger bands on Chainlink suggest price may bounce between $1.560328 and $2.407572 based on its momentum and volatility over the past 14 days. Given its boundaries, rangebound traders may find it compelling to entertain shorting, as we are nearer to the top of the range.

Get your analysis of Chainlink (LINK) here on CryptoCoin.news. And for daily analysis and recaps of the 5 major cryptocurrencies, visit CFDTrading.com. 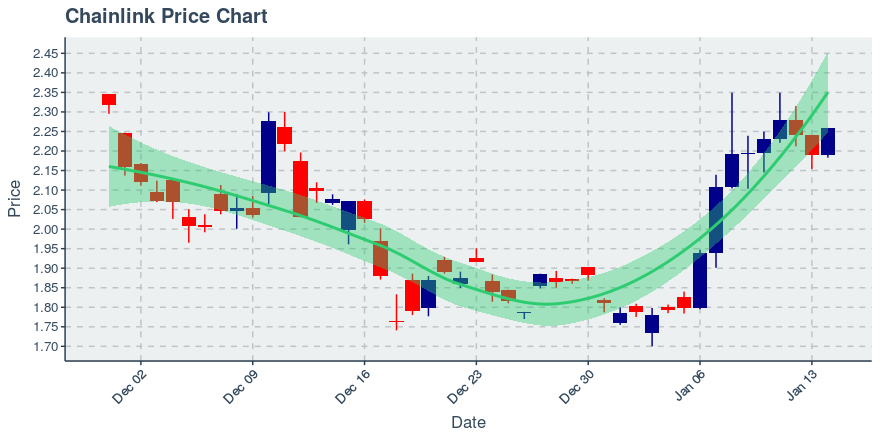 The market capitalization of Chainlink, or the amount of US dollars it would take to buy up all the circulating coins, is currently estimated to be $765 million.

Yesterday saw 11,582 transfers amongst holders of Chainlink. In terms of estimating the number of holders, over the past day the total number of wallets holding Chainlink has gone up by approximately 234. To provide context, we’d rank this token as 2.5 out of the 29 Ethereum tokens in our index based on percentage growth in engagement over the past 7 days.

The top 1,000 Chainlink wallets hold over 91.66% of the token’s total money supply. If we focus on exchanges, which may be an correlated with liquidity and greater confidence in the currency, the exchange wallets that are in the top 1,000 wallets own 0.75% of the currency’s total money supply. Exchange ownership grew by 0.03% over the past week, while the overall ownership percentage of the top 1,000 richest wallets grew by -0.06% over that time period.

Chainlink hasn’t had any activity on any of its GitHub repos since January 13, 2020 — 1 days prior. Growth rates for open issues — a “”to-do list”” of sorts and watchers (“”subscribers”” following a code repository) for Chainlink are growing by 0.13 and 0.5, respectively, over the past 30 days.