In the week prior, the price for IOS token went down by -44.57%. It is below its 20 day moving average by 37.18%, so it’s very far away. IOS token’s bullish momentum, based on its distance from its 20 day moving average, is among the worst compared to other cryptocurrencies, and thus may indicate the coin has swung too far and too fast — and may thus be due for consolidation or a bullish correction. Now when considering volatility, IOS token is more prone to sizable price moves than 83% of coins in our index, so bear that in mind if you decide to trade it. Looking ahead, if the upcoming week mirrors the volatility of three past three weeks, the price range for IOS token in US dollars is expected to be between $0.008188764 and $0.01545874. 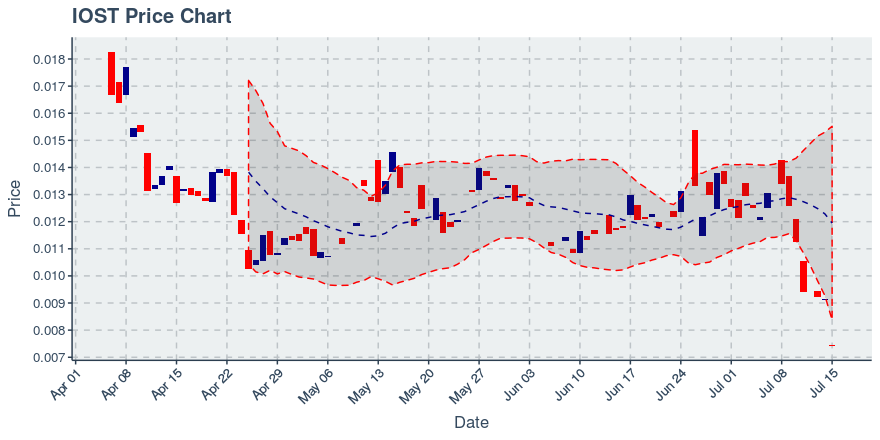 In the week prior, the daily volume for IOST has ranged between 32,794,702 and 723,813,171 currency units. Over the past three weeks, the trend in volume does not have a clear direction, while the price trend is clearly down. The past 7 days saw IOST’s trading turnover — meaning the percentage of its available supply that was traded — come in at 1.98%. Its turnover rate is more than approximately 56.86% of the cryptocurrencies in our index, so it’s middle-of-the-pack; investors/traders may thus wish to consider their liquidity requirements to make sure the coin matches their needs and their expected trading volume.

IOST currently has 30 public repositories on GitHub, with the oldest one now 1.29 years young. The last recorded update to its public repositories was within the past week which is not bad, as the coin is still being updated routinely. IOST’s repos that are visible to the public collectively have 653 watchers — specifically, that’s more than 63 % of the top 100 coins we’re looking at. The coin has 49 issues reported across its public repositories. Relative to the number of watchers it has, though, its open issues count is fairly mediocre. We consider the GitHub open issue/watcher ratio as a potential indicator of the healthiness of a coin’s software development process, and for IOST we see that its issue/watcher ratio looks healthier than 57% of similar coins in our index.

The top theme being discussed about IOST in the past week is listed below. If available, we added an excerpt from the article to help give a taste of what it is about.